Sloth Slept On by Frann Preston-Gannon 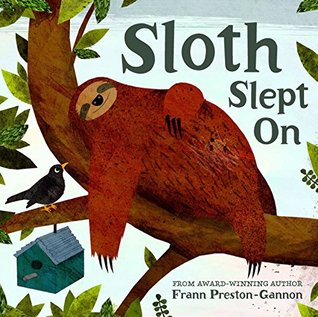 Sloth Slept On is the story of three children who discover a sloth sleeping in a tree. They try to ask it what its name is and what it's doing in their tree but, of course, there is no reply. The children decide they must find the answers on their own and haul the sloth with them. First, they try asking their father about the sloth but he's busy, so they gather books about animals and search through them. Meanwhile, the sloth is sleeping on their floor while someone behind the children is reading a newspaper with the headline, "Zoo breakout! Zookeeper looks high and low for missing animal." Of course, there's a photo of a sloth. Nobody notices, and the adult reading the newspaper is, again, ignoring the children.

The children discuss what kind of animal the sloth is not. They wonder where he came from and dress up as astronauts, imagining that he came from space. They play at being pirates while they think about the possibility that the sloth is a pirate, tired from his adventures. They even wonder if perhaps he was a knight who wore himself out fighting dragons.

Then, one of the children finds a sloth in a book about the rainforest. A two-page spread of factoids about sloths follows. Now that they know sloths live in the rainforest, the children decide they must send him back. They prepare a box with leaves to eat and toys to play with, pack him in the box, and mail him, totally overlooking the signs around town asking people to return the sloth to the zoo if they find him. The sloth awakens to find himself in the rainforest, a postal truck driving away, and he asks, "Which way to the zoo?"

I absolutely love Frann Preston-Gannon's illustrations and adored the other two books I've read by her but Sloth Slept On was a little discomfiting. First, the children are ignored by both adults present. They can read but they miss clues about the sloth that are in plain view. And, then they send the poor guy to a place far from where he belongs. I love the creativity of the children as they imagine the possibilities about what wore out this strange creature. But the idea of that poor sloth getting mailed far away where nobody will find him . . . well, maybe it's an adult problem. As adults, we know that a zoo animal that has been fed and cared for would probably not survive in the wild, so it just made me squirm. I do love the illustrations, though, and I don't dislike Sloth Slept On. It's just not a particular favorite.

Other books by Frann Preston-Gannon I've reviewed (links to reviews):

Dinosaur Farm
How to Lose a Lemur


©2015 Nancy Horner. All rights reserved. If you are reading this post at a site other than Bookfoolery  or its RSS feed, you are reading a stolen feed. Email bookfoolery@gmail.com for written permission to reproduce text or photos.
Posted by Bookfool at 3:05 PM