A Walk in the Sun by Harry Brown 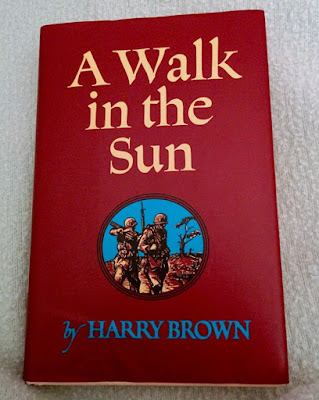 To a man marching in the sun time becomes as static as the shimmering horizon. It surrounds him and presses on his shoulders. He moves, but time stops. Seconds swell to giant size and minutes are immensities. The body conditions the mind's knowledge of time--it flies in pleasure, it crawls in pain. And on no one does its weight fall more heavily than on the soldier. Yet as the platoon wound carefully along the dusty road time warred with itself. It crawled when the men thought of their march, it ran insanely when they thought of their objective. Over them hung the fear and the threat that something was going to happen, that Something was going to happen. They did not feel that they could move fast enough to beat time to the punch. In a normal route march a man can let his faculties go dull, he can become numb. He can slog on, unaware of his surroundings, unaware of anything save the back of the man who slogs in front of him. But under fire, during a landing, during an advance, he must keep continuously on the alert. He must seek out rocks and trees and attempt to see through them. He must recognize that there is an enemy very near at hand and that even the landscape can rise up and kill him.

"Hey Cousins," he said. "What comes after Tibet?"
"What comes where after Tibet, for God's sake?"
"In the war. Where are we going to fight the war after Tibet?"
"How the hell do I know? In bed."
"There's a country. I can't think of its name."
"There's a million countries I can't think of their names."
"All right, I just asked. Forget it."
But Cousins had suddenly lost interest in Archimbeau. Over on the left, about five hundred yards away, he saw two figures coming toward them.
"Arch," he said softly. "Look."
Archimbeau looked. And as he saw the figures Cousins turned and went running back to Sergeant Porter. He crouched a little as he ran.


A Walk in the Sun by Harry Brown is a WWII novel that was published in 1944. It tells the story of a platoon of American soldiers sent on a mission to capture a farmhouse in Italy. Before they land on the beach, their commanding lieutenant becomes the victim of a freak accident. When the second in charge goes to find someone to seek permission to take over the platoon and doesn't return, the platoon begins the 6-mile hike inland. And, then the third in line for command simply falls apart, victim to the fatigue and mental stress of a year of fighting.

The title is perfect. The platoon is literally taking a walk in the hot Italian sun. But, since it's wartime, it's no normal walk. They must deal with the many hazards around them -- mud, heat, hunger, fear, Germans in the air and on the road -- in addition to constantly changing leadership, injuries and loss. Throughout their march, the soldiers joke with each other and give each other a hard time. They worry aloud and make plans for the future. When friends are killed, they choke back the emotion and just keep going.

Highly recommended - Absolutely riveting. At only 187 pages, A Walk in the Sun is a compact, powerful piece of writing, one of the most gripping, realistic war books I think I've ever read. David Abrams, author of the novel Fobbit, book blogger at The Quivering Pen, and a former military man, read A Walk in the Sun just a week before I did and we were both equally stunned that it isn't more widely known and talked about. I'll link to his review when he posts.

I ordered my copy (which looks almost pristine, apart from a scrunched spot on the cover, even though it's a first edition) after seeing a comment about it on a WWII history page. What a lucky catch that was. If you're a WWII fan, I recommend you rush right out to locate a copy. Secondhand copies are available at a reasonable price online.


©2016 Nancy Horner. All rights reserved. If you are reading this post at a site other than Bookfoolery  or its RSS feed, you are reading a stolen feed. Email bookfoolery@gmail.com for written permission to reproduce text or photos.
Posted by Bookfool at 11:15 AM