Close Encounters of the Furred Kind by Tom Cox 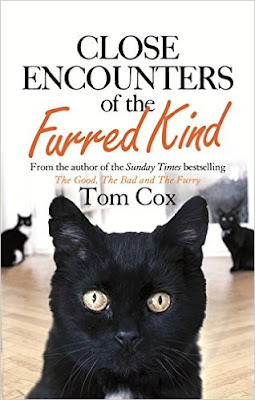 Close Encounters of the Furred Kind is the most recent release by cat-loving writer Tom Cox. I started completely out of order by beginning with the most recent, but I doubt order matters.

In Close Encounters of the Furred Kind, Cox describes his experience moving house twice with four cats, first from his beloved Upside-Down House to a temporary rental and then farther afield to Devon (England). I purchased Close Encounters and another of Tom Cox's books after seeing an enthusiastic recommendation by someone on Twitter. I've followed @MYSADCAT (one of his cats' accounts) on Twitter for a while and have been considering the books for years, but it was that tweet that convinced me to buy the two. And, now I want them all.

Because I was unfamiliar with the four felines and the first third to half involved a lot of moving angst and a distressing time in an environment that suited neither cats nor human, the early part of the book didn't make me laugh out loud, although I did a lot of smiling. But, the second half of Close Encounters of the Furred Kind was doubly entertaining -- both because I was well-acquainted with the individual felines, by then, and because things began to improve. I particularly loved it when the author and his cats settled into their new home near Totnes, a place that not only had plenty of room for roaming and lots of interesting characters nearby, but which also came with an unexpectedly unferal feral cat named George.

George melted the author's heart (and this reader's). It's worth reading the book, if only to find out what becomes of George when he doesn't fit in with Cox's motley crew. But, I loved Close Encounters of the Furred Kind both because of the antics of the cats and the author's huge heart. Tom Cox really understands and adores cats, and he describes their adventures with affection, wit, and charm. This is what I tweeted after finishing the book:


Finished CLOSE ENCOUNTERS OF THE FURRED KIND by @cox_tom after an hour of disturbing the felines with my laughter, last night. #ThumbsUp
— Bookfoolery (@Bookfoolery) March 25, 2016

Highly recommended - I am besotted with the love for cats that shines through in Tom Cox's writing and he's also a very entertaining writer, in general. I should warn cat lovers that there is a cat death (although not one of the author's cats) and that the cats are indoor/outdoor, which naturally means they encounter occasional perils and bring home a large number of "gifts". My current two kitties are indoors-only because of our dearly departed Miss Spooky's many injuries and the fact that I was constantly talking the poor girl down out of trees.

Note: Close Encounters of the Furred Kind is about to be released in the U.S. I ordered my copy from Book Depository because it had not yet been released when I read that enthusiastic recommendation but you don't have a long wait if you're American (and, of course, if you're in a big hurry, you can always go with the Book Depository option).

©2016 Nancy Horner. All rights reserved. If you are reading this post at a site other than Bookfoolery  or its RSS feed, you are reading a stolen feed. Email bookfoolery@gmail.com for written permission to reproduce text or photos.
Posted by Bookfool at 12:03 PM