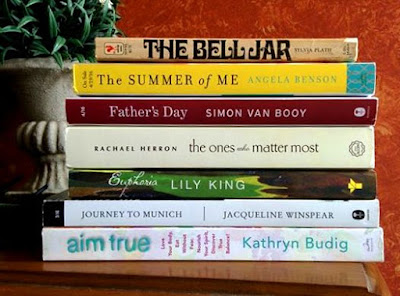 28. Father's Day by Simon Van Booy - Harvey has gathered together a number of gifts to celebrate Father's Day during her father's visit to her home in Paris. Leaping back and forth in time from when Jason was asked to take in little Harvey after the death of her parents and the present day in Paris, Father's Day reveals the story of their life together, Jason's violent past, and how love healed them both. Loved the slow growth of their relationship but Jason was an uncomfortable character with his violent tendencies.

29. The Bell Jar by Sylvia Plath - A fictionalized account of Sylvia Plath's month in New York City, working for a magazine, partying, and becoming dangerously depressed, followed by the description of complete breakdown, suicide attempt, and hospitalization. I'm glad I read this classic but it is definitely a serious bummer.

30. The Summer of Me by Angela Benson - When her twin children go to California to spend the summer with their father and he unexpectedly cuts her child support in half, single mom Destiny has to figure out how to save enough money to not only pay the bills but buy a house so he won't fight for custody. Meanwhile, the local associate pastor, a widower, has caught her eye. Too many threads made the story a bit implausible and overwhelming but I appreciated The Summer of Me for helping me recover from The Bell Jar.

31. Journey to Munich by Jacqueline Winspear - In the 12th installment of the Maisie Dobbs series, Maisie is recruited to fetch an important man who has been held in Dachau prison camp from Germany while posing as his daughter. But, she takes on a second task that is even more dangerous. I haven't read the rest of the series but found this book readable, if not a perfect standalone.

32. Euphoria by Lily King - Three anthropologists, one single and desperately lonely, two married to each other, cross paths when the married couple are forced to abandon the tribe they've been studying. When the lonely single falls for the married woman, what will happen? One of my favorites of the month, but the official synopsis I read is a bit misleading. It's the married man, Fen, who puts them in danger rather than the liaison of Bankson and Nell.

33. The Ones Who Matter Most by Rachael Herron - After childless Abby is suddenly widowed, she discovers her husband was married before . . . and had a son. When she finds them, Abby is shocked to discover that Fern is a bus driver who can barely afford to keep food on the table for herself, her ex's father and girlfriend, and young Matty. Abby's interest in the family is not welcome, but all she ever wanted was a family of her own. Can Abby convince Fern to be her friend? Another favorite. I could hardly bear to put this book down.

34. Aim True by Kathryn Budig - Kathryn Budig shares a little about herself, some yoga routines, recipes, and meditations in this book subtitled: "Love your Body, Eat Without Fear, Nourish Your Spirit, Discover True Balance!" Yet another favorite, I'm holding out on writing the review till I've tried a few of the recipes.

Another 8-book month. I'm learning to live with them, although I confess it's still strange that some nights I don't actually feel like reading at all. I know others who have gone through a lengthy reading slump like this (worse, even) but it still throws me for a loop. I'm pretty happy with my month, though. I loved my F2F discussion book, Euphoria, and The Ones Who Matter Most is the kind of "creation of hodge-podge family" book that I adore. Aim True was a very pleasant surprise - exactly what I'd hoped it would be. Although some of the ingredients are uncommon, at least in our area, I'm hoping we'll be able to find them, now that we have a Whole Foods within an hour of our house.

1914 and Other Poems was so-so but I'm glad I read it and happy that I did manage to squeeze in one volume of poetry before the end of National Poetry Month. I'm also happy to have finally read The Bell Jar, even though I found it a total downer. I can see, now, why everyone said Sylvia Plath was such a talented writer. And, it's always a good month when there's a new Simon Van Booy book on the shelves! No, Father's Day wasn't my favorite of his books, but I always enjoy the familiar rhythm and depth of heart in his writing.

Journey to Munich was just okay, a book that didn't stand alone all that well. I've been told by a number of people that I should go back to the beginning of the Maisie Dobbs series and I will check to see if my library carries the books, soon. It definitely would have helped if I'd known all the people and places from previous books, as Maisie spent a lot of time refelecting on her past. And, The Summer of Me was another book that was just so-so.

How was your reading month?

©2016 Nancy Horner. All rights reserved. If you are reading this post at a site other than Bookfoolery  or its RSS feed, you are reading a stolen feed. Email bookfoolery@gmail.com for written permission to reproduce text or photos.
Posted by Bookfool at 12:12 PM