One Step Too Far by Tina Seskis 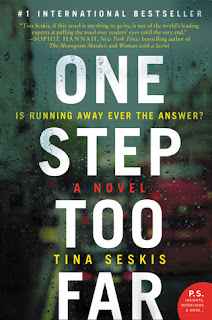 Emily has run away from her family but Ben and Charlie can make it on their own. On impulse, she takes the train from Manchester to London, finds a room in a shared house, makes a friend, locates a job, and begins an entirely new life as Cat Brown. It's a long way down from lawyer to receptionist but she can't go back. Sometimes Cat seems to be blaming herself, sometimes her twin sister, Caroline. But, whatever happened, she can't think about it . . . at least until the one-year anniversary, when the thought makes her so ill that things go terribly wrong, just because she's trying to forget. What happened to make Emily run away from home? Has she gone far enough? Or has she gone too far?

OK, hmm, mixed feelings about this one. I could put up a spoiler warning but I don't really want to mess it up for anyone, so I think instead I'll just try to keep it vague and talk about what I liked and disliked about One Step Too Far, beginning with the problems I had with the story.

Things I didn't love about One Step Too Far:


Things I liked about One Step Too Far:


Recommended but not a favorite - I didn't care for the way the author twisted that little something to make the reader believe one thing when the truth was a shade different. I felt used. But, I liked the setting, eventually found the book compelling, and also thought the truth of the ending was believable. So, overall, I liked the book but there were a few too many implausibles for it to become a favorite. Having said that, I would definitely read this author, again. One Step Too Far is apparently the author's first book. If so, I'm impressed. It's definitely well-written and with a little less trickery I think she could very well write a 5-star thriller. I don't know that I feel like One Step Too Far should be categorized as a thriller because it never appeared that Emily/Cat was hiding from anyone but herself; it didn't appear likely that anyone would pursue her. But, that's just semantics. The story worked in many ways and I'm glad I finished it.


©2016 Nancy Horner. All rights reserved. If you are reading this post at a site other than Bookfoolery  or its RSS feed, you are reading a stolen feed. Email bookfoolery@gmail.com for written permission to reproduce text or photos.
Posted by Bookfool at 8:30 AM

Email ThisBlogThis!Share to TwitterShare to FacebookShare to Pinterest
Labels: recommended but not a favorite, Tina Seskis, William Morrow