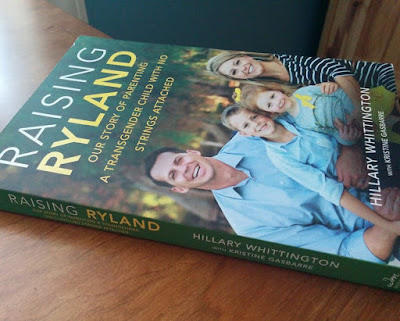 
Raising Ryland is the story of one family's experience transitioning a very young child from female to male. I first became aware of Ryland's story when a video telling about how he transitioned went viral, a year or two ago:

It was the video of Ryland's transition along with a scathing opinion article attacking those who identify as transgender that convinced me I needed to read up on what exactly a transgender person is. I had no understanding whatsoever about what goes on in the mind of someone who is transgender but my viewpoint as a Christian has always been, "It's not my place to judge. I must love everyone equally." With that in mind, I began reading articles by and about the transgendered. When Raising Ryland came up for review, I jumped on it.

Because Ryland was so young when he declared that he was a boy, his transition is probably pretty controversial and I admit that I have mixed feelings. However, there were only two things about the Whittington's parenting that I questioned. One was the fact that they freaked out so early in Ryland's life. They grew Ryland's hair long, put her in cutesy dresses and bows, and then were embarrassed when their little girl refused to wear a bathing suit with a top, asked for clothing from the boys' department when shopping and hid in the closet, dressing in dad's clothing. I have a granddaughter whose parents tend to only put her in dresses for holidays. She wears a lot of pink but she's often dressed in jeans or leggings with a simple knit shirt. And, sometimes she doesn't want to wear a shirt at all. From my own experience, I can tell you that toddlers can be pretty stubborn about clothing and toys; that alone is not unusual. So, I thought they became concerned a little too quickly. However, they had already dealt with the fact that Ryland was born deaf, so perhaps they were more sensitive than they might have been, otherwise.

The only other concern I had is that Hillary Whittington says Ryland won't be changing his mind, although he has softened up about playing with more feminine toys, now that he's been allowed to transition. As open as they've been about allowing Ryland to transition, I would have expected them to be equally understanding if he changes his mind, some time in the future. Having said that, I suspect that if Ryland does change his mind, they'll be okay with it, even though the author is emphatic about him being transgender and that he won't change his mind. The future is yet to come.

Otherwise, nothing jumped out at me. When the author became concerned about her child's determination to be thought of as a boy, she researched transgender children and talked to experts. This was not a decision that was taken lightly and if you watch the video or read the book you'll find that Ryland's parents were motivated by the frightening statistic that 41% of transgender individuals attempt suicide. More than anything, they wanted to raise children who are comfortable in their own skin and happy to be alive.

The bottom line is, we embarked on this path with Ryland specifically as a response to stories about the risks of suicide and self-harm, and because we refused to see that happen to our child.

Recommended, particularly to those who are curious about why a child would transition to the opposite sex so young or what it means to be transgender. Memoirs can be humbly written, narcissistic, or somewhere in between. I felt like Raising Ryland leaned toward the self-congratulatory end of the spectrum but had no problem ignoring that. It's notable that the family lives in California, a state where anyone can use the bathroom of his or her choice (a California friend expressing her frustration at recent so-called "bathroom bills" told me of the lack of controversy in her state and said, "We pee happy!"). The Whittington family also has a strong support group with a particularly understanding family. I doubt transitioning a child so young would go quite as well in other states and for those who are lacking such an amazing support network. The writing itself was average, easy to read, nothing special.

What this book was missing:

A list of resources. I would have particularly liked to see a list of other books for further reading, particularly those mentioned in the book. I didn't think to flip to the end of the book to see if there was a reference section or I might have marked the few resources that were mentioned, as I'd definitely like to read more.

Just after I closed Raising Ryland, I found this wonderful article written by a Baptist preacher, which I found particularly helpful explaining the science of being transgender:

I also read the opposite viewpoint, an article written by a woman who was a tomboy as a child but eventually grew out of it:

There are some distinct differences between the experiences of the former-tomboy who wrote the latter article and that of Ryland. Had I not read the book, I might have been swayed by that particular woman's opinion. Instead, I felt like some of what she said at the end of the article went further to prove that Ryland probably is genuinely transgender, rather than just a tomboy, as she implies. But, you really do need to read about what it means to be transgender to be aware of the differences, which are subtle but significant.

At any rate, I felt like I learned a bit from Raising Ryland but I need to read more to fully understand what it means to be transgender. Raising Ryland was definitely a good start on the road to understanding.

©2016 Nancy Horner. All rights reserved. If you are reading this post at a site other than Bookfoolery  or its RSS feed, you are reading a stolen feed. Email bookfoolery@gmail.com for written permission to reproduce text or photos.
Posted by Bookfool at 10:39 AM