The Ones Who Matter Most by Rachael Herron 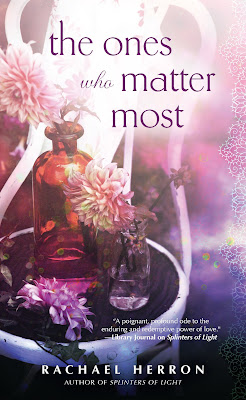 The Ones Who Matter Most by Rachael Herron
Copyright 2016
NAL Accent - Contemporary Fiction
416 pp.

When Abby is suddenly widowed, she makes a shocking discovery: she was not her husband Scott's first wife. Curious, Abby seeks out first wife Fern and discovers that Scott had a son, Matty. Fern is a bus driver who struggles to get by, living in a small house with Matty, Scott's father and his father's girlfriend. Although Scott never had anything to do with Fern or his son, he did at least send regular support checks. Now, Fern will have to find extra work to get by.

Abby's parents both died long ago and although they left her well off, there is really nothing she desires more in life than a family. But, she has been unable to carry a child and now she no longer has a man in her life. Seeing young Matty makes her long to get to know him and his family. But, Fern is not interested in Abby's yearning for friendship or her offers to help out. With Fern's financial situation increasingly falling apart and Abby charming young Matty, will Fern give in and let Abby become a part of their world?

Here's the interesting thing about The Ones Who Matter Most, at least to me. I thought it was going to be terrible for at least the first 30 pages. Abby has a crunchy hippie friend who sets her to work getting rid of unwanted possessions a mere two days after Scott has died. I just couldn't fathom that. The first couple of weeks are so overwhelming, with people visiting and bringing casseroles, offering their sympathy, and all the decisions about burial and funeral service that it was hard to believe Abby would even have a moment alone with only one friend. That was my personal experience getting in the way of the storyline, of course. I also wasn't sure I was going to like Abby because I didn't know her motivation for what happens in the opening pages.

Fortunately, that hesitation didn't last long. Yes, the opening is flawed. But, Abby quickly becomes endearing. She's got boatloads of money but she has not had an easy life. She lost both parents early on, has been unable to carry a pregnancy, and now she's a young widow. When she offers to help Fern financially and starts spending time with Matty, she means well. She's really quite sweet.

Fern, on the other hand, is tough. She's got a huge heart but she's had to work hard to keep her odd little jumble of a family fed and she's constantly facing new challenges like broken appliances. It's only natural for her to put up a defensive wall; more than anything, she wants to protect her family.

Highly recommended - I absolutely adored the characterization, the challenges to the characters, and the way Abby slowly hacked down Fern's defenses. While the beginning of The Ones Who Matter Most was a bit rocky because it didn't feel like it had the ring of truth when it came to the aftermath of a sudden death, that rapidly changed and I felt the long, drawn-out process of softening Fern was believable. There was only one plot point I didn't adore (a suggestion by her hippie friend) beyond the beginning but it had a purpose and, in the end, I had to acknowledge it helped lead to the absolutely perfect, happy-tears ending. I just want to clutch this book to my chest, I love it so much.


©2016 Nancy Horner. All rights reserved. If you are reading this post at a site other than Bookfoolery  or its RSS feed, you are reading a stolen feed. Email bookfoolery@gmail.com for written permission to reproduce text or photos.
Posted by Bookfool at 12:40 PM