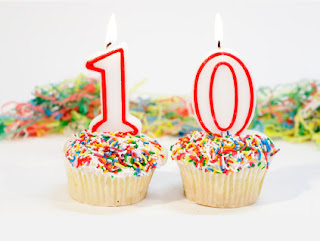 First things first: It's my 10th bloggiversary. I cannot believe an entire decade has passed since I began blogging, although so much has happened! I've made some incredible friends who share my passion and some who authored favorite books, said goodbye to my mother and two cats, been adopted by two new kitties, become a mother-in-law and a grandmother. I've read hundreds of books and discovered that I really, really do not like reading them in electronic form (good old paper for me, baby). I've watched both children graduate from college and get jobs and traveled to some fabulous places -- some of which would not have happened if not for the blog. It's been a good run . . . so far. On to malarkey before my farewell.

No arrivals, this week.


And, now, it's time for a break but not for any of the reasons you might expect. At the beginning of 2016, when I lost a friend suddenly to cancer, I made a promise to myself to stick it out till my 10th bloggiversary and then take a significant break. I'm not tired of blogging or frustrated or worried about the fact that not as many people visit my blog as they did in the beginning. While I miss the close relationships I had in the early blogging days, some of those have matured and moved on to Facebook, letter-writing, visits in person. In some ways it's better to have fewer visitors at the blog; it was a little overwhelming when my blog was kind of popular, early on.

Nope, I just made myself a promise to take a big break and I've decided to keep it. It's possible that I'll reevaluate whether or not I want to continue blogging while I'm away. But at this point I fully intend to come back. And, I still plan on writing the monthly review posts because I'm not going to quit recording my reads, here. I have an end-of-year-post that I update every time I finish a book. However, this is going to be a long break, anywhere from 2 to 6 months. I won't know till I get there. If I'm not back by the end of the year, apart from the monthly posts, I'll return at the beginning of 2017 with an update.

In the meantime, I'll continue reading, of course, and writing brief reviews at Goodreads. I'll update my personal Facebook timeline. I'll tweet about my reads on Twitter. I sit down at the computer to tweet so I'm just a drop-in tweeter but I'll work harder at updating there, hopefully with photos. If/when I return, I will have a different home email address, but my gmail site will continue to function if anyone wants to get in touch. Have a fabulous summer!


©2016 Nancy Horner. All rights reserved. If you are reading this post at a site other than Bookfoolery  or its RSS feed, you are reading a stolen feed. Email bookfoolery@gmail.com for written permission to reproduce text or photos.
Posted by Bookfool at 5:41 PM