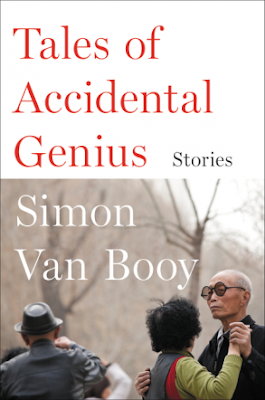 After being alone for a few days, she would feel some pull of inspiration. It could come from anywhere: lemons in a bowl were enough; the blowing trees in the park were enough; the migration of clouds; the color of water; words from a passing conversation she carried with her like loose stones.

And that was the problem with Michael Snow's screenplay, she realized, seeing the manuscript on her desk--that it worked so hard to conjure love, when love was most felt in its absence.

When they landed at LAX, a uniformed driver from the hotel was holding a sign. "We should have told him our last name was Godot," David said. "Just for fun."

Let me just get the swooning part out of the way . . . Ohmygosh, how I love Simon Van Booy's writing.

I read Tales of Accidental Genius in January, so this is a reread but not a second review. I don't know why I do this, but I always blast through Simon's books when I first get them and then I take my time slowly reading and absorbing, a second time. And, then I return to favorite short stories when I need an upper. I love his writing that much.

Tales of Accidental Genius is every bit as wonderful as Simon's other short story collections but a tiny bit different in that the last story is long enough that it appears to be a novella. On the blast-through reading, I was so surprised to find that the last story was the last story that I kept flipping to see when it would end. That final story begins about 1/3 of the way into the book . . . and yet, the stylized printing with fewer words on each page is maybe slightly deceptive (so I'm not certain that it's a novella). I think, for that reason, I loved it the second time in a way that I couldn't the first, simply because the surprising length of the final selection unbalanced me.

At any rate, I loved Tales of Accidental Genius on the first reading and I adored it the second time around. And, this happens every single time I read a book of Simon Van Booy's short stories. I always end up appreciating the nuances and rhythm and depth of heart even more when I reread. But, I just have to do the blast-through read, for some reason.

Counting the story that serves as an introduction to the final maybe-novella, there are 7 stories in Tales of Accidental Genius. Some favorites:

"The Menace of Mile End" - Elderly Mr. Baxter goes through the motions of living, occasionally bitter about the young people who make noise outside his solitary London flat, the back part of a former church wedged in an upscale business district. But, when a homeless man is attacked outside his home, Mr. Baxter discovers that he isn't such a curmudgeon, after all.

"The Goldfish" - Piper, an old man's goldfish, has gone belly up in his tank. Concerned, he goes to the aquarium and the vet but is unable to find answers. So he stops at a pet shop, where the compassion of a young man who understands pain leads to a beautiful ending.

Really, there's only one story I don't consider a favorite. But, I liked it. So, Tales of Accidental Genius is a 5-star read. The only problem I've really have had with the book, lately, is that I keep sitting down to write my review and as I'm thinking about the stories I think, "Wait. I want to read that, again," and dash off down the hallway with the book in hand. That's why I decided I'd better stop after describing two of the stories.

The "Genius" in the title is not regarding intelligence, at least not the kind that's measured with tests and numbers. Instead, it's about the genius of finding the perfect way to show compassion. I'll give you an example but since it tells what happens to Piper, the goldfish, I'm going to set it off with a spoiler warning . . .

The perfect way that young Akin finds to show compassion to an elderly man who doesn't realize his fish is actually dead? He tells the man Piper had twins and died in childbirth after slipping two new fish into the tank.

It's those moments of brilliant emotional genius that make the book such an uplifting read, of course.

Highly recommended - One of my favorites, so far in 2016. I've read it twice (some stories 3 times) and I know I'll return to Tales of Accidental Genius many, many times. There's at least a little heartbreak in every story, but there's also an act of kindness. Tales of Accidental Genius is the kind of book you press to your heart when you finish it. Also, I think it's notable that Simon's sense of humor really shines through (as in that comment by the character, David, that he should have told the driver their name was Godot, so he'd have been waiting for Godot).

©2016 Nancy Horner. All rights reserved. If you are reading this post at a site other than Bookfoolery  or its RSS feed, you are reading a stolen feed. Email bookfoolery@gmail.com for written permission to reproduce text or photos.
Posted by Bookfool at 2:30 PM