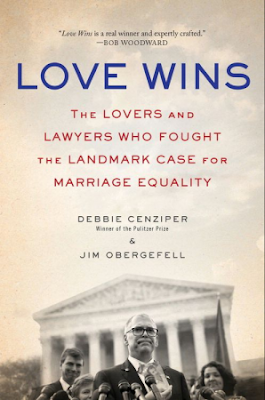 Love Wins: The Lovers and Lawyers Who Fought the Landmark Case for Marriage Equality by Debbie Cenziper and Jim Obergefell has not yet been released, so I'm jumping the gun a bit, but the scheduled release date is the 16th of this month, so it's coming soon.

In Love Wins, the story of how and why the case for marriage equality began and how it ended up in the Supreme Court is told. The story begins with Jim Obergefell, how he met John Arthur and they ended up living and working in Ohio, their home state. Ohio was not friendly to gays and it wasn't till John Arthur was near death that the two finally decided to marry in Maryland. Their marriage was not recognized by Ohio, and when Obergefell found out his name would not be put in the spouse box on Arthur's death certificate, that was when he sued the state of Ohio. They were together 21 years.

Al Gerhardstein was the lawyer who took on Jim Obergefell's case and, later, the cases of several sets of gay parents who wanted to both be recognized as parents. In the case of females, only the biological mother was considered a parent and in the case of adoption (usually by males), the same was true; because marriage between gays was not legal, only one person was considered the parent.

So, what's the problem with a gay marriage or gay parenthood not being recognized legally? Primarily, it has to do with issues like insurance, ownership of possessions, ability to approve medical treatment, and similar rights that those of us who are in heterosexual marriages often don't give a second thought. I was aware of that when the Obergefell case went to the Supreme Court, but I didn't know the background -- the specific cases that led to those which became the combined case known as Obergefell v. Hodges. All of them are very moving. It's a very emotional read.

Imagine you have a child that is gasping for air. Your pediatrician is concerned enough to tell you to rush the child to the emergency room. You're the only parent available, so you hasten to the hospital with your child and there you are told that you're not your child's parent so you can't approve medical treatment. You're standing there with a child gasping for air in your arms, but still you are told, "Sorry, we can't do anything unless we get permission from the child's parent." You have nurtured this child since birth and yet you're not considered his parent because you're a lesbian and your partner or wife is the biological parent. This is one of the true stories in Love Wins. It ended well. The child had croup (which can kill but is not usually deadly) and eventually permission was granted for treatment. But, what if it had been something even more life-threatening? What if he had begun to turn blue because he wasn't getting enough oxygen? What if he stopped breathing entirely?

The problem was that not acknowledging marriage meant not acknowledging that a spouse was the next of kin, a technicality that led to legally sanctioned discrimination. That's what marriage equality changed and Love Wins walks you through the legalities from the side of those who were discriminated against and the lawyers who worked to change that.

Recommended - The writing was, in my opinion, a little above average but not fabulous. At times, I had to reread a sentence or paragraph to figure out who was being referred to when two people were mentioned and then the author referred to one or the other in pronoun form. But, the emotional impact is huge. I lost count of how many times I teared up. Whether or not you believe marriage between gays is a moral issue, what you really need to understand is the human side of being blocked from the legal benefits of marriage. While I enjoyed Love Wins for the legal details, it's the way it shows the human side that really makes Love Wins an inspiring read.

Clearly, marriage equality is still a divisive/controversial issue and it should be noted that there are times Christians who consider homosexuality a sin or Republicans might consider some of the discussion frustrating, but I think the author(s) were careful not to jump all over the opposing side. This quote, for example, is by Lee S. Dreyfus, a Republican governor who spoke when Wisconsin became the first state in the country to prohibit discrimination against gays:

"It is a fundamental tenet of the Republican Party that government ought not to intrude in the private lives of individuals where no state purpose is served, and there is nothing more private or intimate than who you live with and who you love."

~Quoted on p. 69 of ARC (changes may have been made to the final, print version)


Similarly, the Roe v. Wade decision was based on privacy, not on morality. I didn't realize that until recently, when I read about Ruth Bader Ginsburg in Notorious RBG. At any rate, I really enjoyed learning about the basis for the Supreme Court decision on marriage equality and definitely recommend the book to those who want to understand how and why it came about.


©2016 Nancy Horner. All rights reserved. If you are reading this post at a site other than Bookfoolery  or its RSS feed, you are reading a stolen feed. Email bookfoolery@gmail.com for written permission to reproduce text or photos.
Posted by Bookfool at 1:28 PM