I reviewed Feather Brained by Bob Tarte at Goodreads and Amazon (the latter at the author's request) so I felt a little tapped out on reviewing the book after that first round. Sorry, Bob. I don't cut and paste. All three reviews are a shade different. Of course, I had to review it here for my permanent records, once I got over myself. 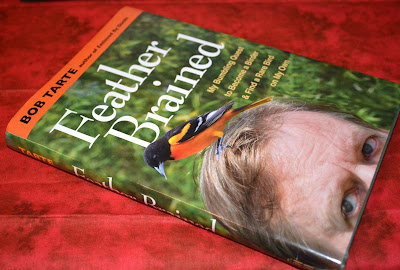 A door had burst open to reveal a secret world that had been hiding in plain sight. These birds were the mouthpieces for the seasons. They were what we had lost when we learned to speak. They were themselves and nothing more in the same way that we were ourselves and something less. Just by being, they made me happy.

Feather Brained is a memoir that tells of author Bob Tarte's interest in birds, how it developed, and why it took him several attempts before he regularly began going on field trips to locate interesting birds while hunting for a rare bird (not a specific rare bird but any rare bird). It took me a long time to read the book because I kept stopping to Google various birds as I was reading about them. Fortunately, about halfway through the book, Bob informed me that he has a photo section dedicated to the birds he discusses in the book at his website. Here's the easy link:

Each link takes you to two chapters' worth of photos. Fortunately, what I'd already read was so vividly described that I had no trouble remembering what the chapters were about when I belatedly flipped through the photo sections.

I've read some of Bob Tarte's other books and loved them, so I was thrilled when Bob asked if I'd like to review Feather Brained.

Feather Brained is lighthearted, informative, and filled with Bob's trademark humor. In Feather Brained, he admires the encyclopedic knowledge of birders while describing his own efforts to learn and making it sound like he's a complete disaster. I've been following Bob on Facebook for a while and I'm impressed with his knowledge of birds, so don't let him fool you.

The two things I loved most about Feather Brained were his growing understanding of animal life  (something I've mentioned in reviews of his other books) -- the surprising intelligence and memory of birds, for example, which were aided by his wife's agreement to help with bird rehabbing -- and his relationships with his wife, Linda, and his somewhat curmudgeonly friend, Bill (whom he refers to as "book character Bill Holm" on Facebook). I was well into adulthood before I got over my misunderstanding of animals as purely creatures of instinct, myself, so I always appreciate reading about Bob's learning experience, which bears some similarities to my own. I also absolutely adored what amounted to Bob and Linda's love story. And, Bill Holm is a hoot. While Bill is a little wary of the obsessive side of birding, Bob seems gobsmacked by birders' knowledge. He does, however, share some hilarious interactions with them, which are not always flattering but definitely will make you smile.

Recommended - Subdued by comparison with Bob's other books, humor-wise, but every bit as entertaining, Feather Brained made me appreciate the effort that goes into identifying birds. And, it made me feel better about never being quite sure what kind of hawk I'm looking at, if they don't have the obvious red tail. Whew! I feel so much better about that.

Scanning the frozen wastes with binocs I caught a ripple of brown and white on the ground. Gotta be a bunting, I decided. Switching to the scope, I twiddled with the focus knob to sharpen the view of a Snickers wrapper impaled on a twig.

Ha! I guess that's similar to the hawks I've spotted that turned out, upon closer observation with the use of a 300mm camera lens, to be plastic bags snagged on a high branch. You might be surprised how often that happens.

Click through to read my reviews of past books by Bob Tarte:

I have not yet read Fowl Weather, even though I mentioned wanting to, when I reviewed Enslaved by Ducks. That's because it's partly about dealing with his mother's Alzheimer's and I was so stung by my mother's death that I couldn't bear to read about a mother in decline, for a long time. It was long enough ago, though, that it's no longer an issue. I really need to track down a copy of Fowl Weather.

Also of note, there is a set of discussion questions in the back of the book, and that's where Bob really let his sense of humor run loose. I closed the book laughing at the final question:

Bob says about his favorite bird, "No bird was a better bird than a bird I saw with Linda." Isn't he a prince? What is the extent of your injuries from swooning over this line?

What a great way to end a book!


©2016 Nancy Horner. All rights reserved. If you are reading this post at a site other than Bookfoolery  or its RSS feed, you are reading a stolen feed. Email bookfoolery@gmail.com for written permission to reproduce text or photos.
Posted by Bookfool at 8:01 AM