14 Seconds to Hell by Nick Carter 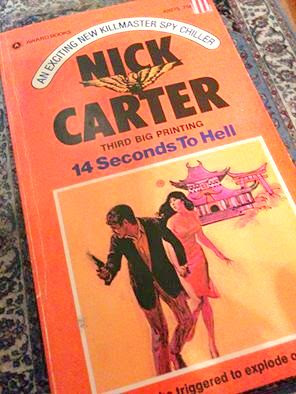 Nick Carter is the "Kill Master" mentioned in that arch above what appears to be the author's name, the heroic and sex-crazed American Agent to whom credit is given as author, even though he's fictional and the copyright is held by the publisher. In 14 Seconds to Hell, Nick is given the instructions and equipment he will use to destroy an evil Chinese scientist's nuclear weapons. Seven warheads are trained on the Western world and Peking's leaders are looking forward to world domination after blowing everyone else to Kingdom Come. It's a race against time and the Soviets are willing to cooperate with the U.S. to help.

At first, Nick and Russian agent Alexi can't keep their hands off each other. Nick is, it seems, irresistible (or, perhaps she's a "nympho"; Nick can't help but wonder, because clearly a woman who likes sex is not normal, unlike a guy . . . ) and the first three chapters are dedicated to a little sex, a little planning, more sex, more preparation. And, then Nick discovers he's been bedding both Alexi and her twin, Anya, at which point you will either throw this hilarious 1968 pulp novel at the wall or laugh and hope the action will begin in earnest, soon.

Fortunately, after the first three chapters, the real spy business begins. Nick, Alexi, and Anya face numerous challenges as they travel to Dr. Hu Tsan's compound. On the way, one of the girls sleepily asks about America: "Are there many go-go girls? Is there much dancing?" Whew, the things a female spy worries about.

At the complex, they face poisonous gas and extreme misogyny. The evil scientist has had a really, really bad experience, it seems, with a Western woman, and he's determined to punish them all. To that end, he has created a torture machine that gives women orgasms repeatedly and frequently till they break and become zombie-like shadows of their former selves, barely able to function. The trio of spies are captured and Nick must use his wits and strength to save both the world and the two women.

Hilariously bad but fun - 14 Seconds to Hell is the first of the Nick Carter series that I've read. It was nutty fun. I particularly loved the action, of course - I always love a fast-paced plot. But, it's both horrifying and laughable in its extremes. The sexism! The fact that nobody knows if they blow up half the world they'll all die of radiation poisoning, too! The amazing lack of professionalism of both male and female when working with the opposite sex! You'll either love it or hate it. I thought it was a fun ride and I'm looking forward to eventually reading the other two books my friend sent. 14 Seconds to Hell is definitely "of the time". It's certainly a lesson in how far we've come.

It's also a bit of a lesson in what we've lost, as the evil doctor talks about the "empty concepts" of truth, justice, mercy, honor, compassion, right, and wrong that are favored by Westerners. "Honor" struck me, and often does when I read older titles. It's something that isn't talked about much, anymore. Also, helicopters are occasionally referred to as "whirlybirds". Haha. I only know the copyright date because I can read Roman Numerals. Do they still teach how to read Roman Numerals in school? Just curious.

©2016 Nancy Horner. All rights reserved. If you are reading this post at a site other than Bookfoolery  or its RSS feed, you are reading a stolen feed. Email bookfoolery@gmail.com for written permission to reproduce text or photos.
Posted by Bookfool at 3:52 PM