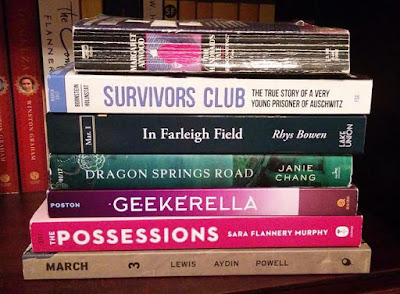 11. The Handmaid's Tale by Margaret Atwood - I had only a vague idea what I was getting into when I opened this dystopian modern classic. My expectations were exceeded. The idea of the subjugation of women by an unnamed religious sect is more realistic than most of us would like to admit, judging from discussion with friends. A terrifying, depressing novel that I'm glad I read.

12. March, Book Three by Lewis, Aydin, and Powell - The third in the graphic memoir series starts with the bombing of a church and ends with the signing of the Civil Rights Act by President Johnson. I wish I'd had this series years ago - an excellent tool for educating young and old about what African Americans had to go through to receive basic rights.

13. Geekerella by Ashley Poston - Just thinking about this book brings a smile to my face. The story of a geeky 16-year-old who is determined to attend a sci-fi convention and win a cosplay contest in the hopes of escaping the drudgery of her everyday life, sweetened by a texting romance with the star of her favorite cult classic TV show. Charming and full of surprises.

14. Dragon Springs Road by Janie Chang - When a young half-Chinese girl is abandoned by her mother, she is taken in as a bond servant by the family who buys the compound in which she lives and watched over by a magical fox. Because of her mixed heritage, even education won't likely save her from ending up a prostitute or worse. A well-told story about prejudice in early 20th Century China.

15. In Farleigh Field by Rhys Bowen - A bit of mystery and a touch of romance in a WWII setting with a daredevil pilot, a spy, and the woman they both love, a codebreaker at Bletchley Park. A large cast means it takes time to get to know everyone but it's worth hanging in there. I liked the characters, enjoyed the story, didn't feel like the plot was entirely cohesive but found the book a good read, anyway.

16. The Possessions by Sara Flannery Murphy - Eurydice's job is channeling the spirits of the deceased for their loved ones. But, when she becomes obsessed with a particular client, she knowingly endangers her own life. Atmospheric, unique, with a satisfying ending.

17. Survivors Club by Michael Bornstein and Debbie Bornstein Holinstat - The story of the Bornstein family with focus on the author, Michael Bornstein, who survived Auschwitz as a very young child. Both heartbreaking and miraculous. This is the first time I've ever read a Holocaust book that describes a man who was in the Judenrat and it was eye-opening what he went through.

February was kind of a slumpy month for me, but it had its standouts. Favorites were Geekerella, Survivors Club, and The Handmaid's Tale, even though the latter two were both difficult reads, emotionally speaking. I lost track of how many times Survivors Club brought me to tears.

March, Book Three was a satisfying conclusion to the series and I highly recommend the trio, especially for teaching purposes.


©2017 Nancy Horner. All rights reserved. If you are reading this post at a site other than Bookfoolery  or its RSS feed, you are reading a stolen feed. Email bookfoolery@gmail.com for written permission to reproduce text or photos.
Posted by Bookfool at 8:01 AM