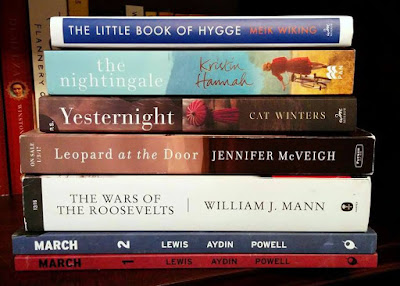 1. Wouldn't Take Nothing For My Journey Now by Maya Angelou - A book of essays written by the famous poet, including topics such as feminism, diversity, and the brevity of life. I always come away from reading anything by Angelou with deep admiration and a heightened appreciation for life. She was a force of nature.

2. Leopard at the Door by Jennifer McVeigh - After spending several years in England, a young white woman returns to her father's home in Kenya, where the Mau Mau - blacks rebelling against white colonists - are growing more brutal by the day. Rachel has two secrets, both of which endanger her life.

3. Yesternight by Cat Winters - A young psychologist who travels to Oregon schools interviewing children is faced with a unique problem: a young girl who claims to have been a woman who drowned in Kansas and went by the name Violet Sunday in a previous life.

4. Faithful by Alice Hoffman - After a tragic accident leaves her best friend in a coma, Shelby becomes seriously depressed and begins to take drugs. But, surprising change happens when her drug dealer, a boy from school, treats her with unexpected kindness.

5. We Should All Be Feminists by Chimamanda Ngozi Adichie - A very short gulp of a book about feminism, first presented as a TEDx talk. Particularly interesting for Adichie's descriptions of how women are treated in the United States vs. Nigeria, her two homes.

6. The Nightingale by Kristin Hannah - The story of two sisters who are faced with the horrors of occupation in France during WWII. One is married with a child and a husband who has been called up to fight while the other is single and headstrong. Both courageously fight the Nazis in their own way. This was a book group selection and the discussion was excellent.

7. The Wars of the Roosevelts by William J. Mann - A book about the Roosevelt family and their behind-the-scenes battles to both suppress the wilder elements of their family who might interfere with their political aspirations and to rise to power.

8. The Little Book of Hygge by Meik Wiking - Subtitled "Danish Secrets to Happy Living," this book is about how the Danish make their lives happy and cozy. Although a lot of the focus was on doing things during the long winters and our weather is the opposite, I still thought a lot of the suggestions were either applicable or could be altered a bit to fit our need to stay cozy and cool, rather than warm.

9. March, Book One by John Lewis, Andrew Aydin, and Nate Powell - The first in a series of graphic biographies about John Lewis and his participation in the peaceful movement for Civil Rights and the Voting Rights Act, beginning with his love of learning and sense of adventure in childhood.

10. March, Book Two by Lewis, Aydin, and Powell - The second in the graphic trilogy. I don't recall where it began or ended, but the second book was probably focused on the organizations Lewis was involved in, how they trained people to protest peacefully, and the violence that occurred when they did sit-ins and marches. There was enough violence in this second installment that I felt like I needed to take a break before reading the third book.

I considered January an excellent reading month, even though the quantity of books read was not huge. Favorites were Wouldn't Take Nothing For My Journey Now, The Nightingale, The Wars of the Roosevelts, and The Little Book of Hygge. Quite a variety amongst those favorites!

I also really enjoyed the first two March books, We Should All Be Feminists, and Faithful. I had some problems with Yesternight, particularly the small final section at the end of the book, which I thought was totally unnecessary. But, I liked the book for its uniqueness and have kind of mentally erased that last section.

Leopard at the Door was interesting for the history lesson about the Mau Mau. I'd heard about the Mau Mau Rebellion, but it was not something I really knew a thing about. I found the book awfully slow and I can't say I understood or related to the heroine at all, though; her motivation for keeping one of her secrets made sense but the other one . . . no sense at all. So, it's my least favorite but not a book I feel I should have chucked at the wall.

All in all, a pretty terrific month. Two of the books that aren't shown in the picture were books I checked out from my local library and one was (gasp!) an e-book.

©2017 Nancy Horner. All rights reserved. If you are reading this post at a site other than Bookfoolery  or its RSS feed, you are reading a stolen feed. Email bookfoolery@gmail.com for written permission to reproduce text or photos.
Posted by Bookfool at 8:01 AM