The Last One by Alexandra Oliva 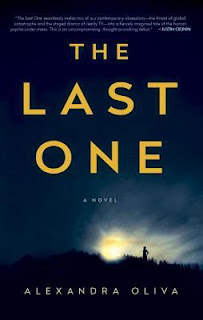 My copy of The Last One doesn't look like the image above, but I ordered a copy from Book Depository (probably the British release) and was unable to find a decent image of it online.

The Last One by Alexandra Oliva has two parallel storylines. The heroine, Zoo, is a contestant in a reality survival series. In her first scene, she's looking for food in a convenience store that's mostly stripped bare. Inside the store, there's a dead body. She thinks it's a prop, not a real dead person. The reader knows, though, that the dead person is real. How did Zoo end up alone and unaware that a deadly illness has ravaged the country? Is anyone alive at all? To find out how events unfolded, the second storyline takes you back to the beginning of the reality series, where you meet the entire cast, the host, the experts, and other people involved in the production of the new survival series.

It's been a few weeks since I read the book but I believe the series begins with 12 contestants. Their tasks are simple, at first, and they work in teams. Each of the contestants is given a nickname of some sort (Zoo is not the heroine's real name) and during the chapters that are written from Zoo's point of view, she refers to them by their real names. Trying to figure out which real name goes with which series nickname is part of the fun; it's a bit like solving a puzzle.

At first, there are rewards for successfully finishing challenges, with the winner receiving the best prizes (generally survival tools, the best place to sleep, or food). Gradually, the number of contestants is narrowed down, teams change, tasks grow more difficult. When they finally reach the point at which they must go it alone, there is no set date for completion and the remaining contestants are told they'll know when it's over. This is part of the reason Zoo continues to believe she's being challenged when the show has long since ended. When she becomes uncertain about where she's supposed to go next, she decides to make home her goal.

Will Zoo make it home? Is she the only survivor of the pandemic that has wiped out people along her route home? What's become of her husband and the other contestants?

Highly recommended, especially to fans of novels about survival - There is one particularly horrifying scene that haunts me, but part of what you get out of The Last One is the sense of what can happen when a person doesn't truly understand what's going on and what kind of pain and regret you can be left with after you realize you've framed your behavior on a certain set of expectations when reality was completely different. I found that the horror gave the book more depth than it would have had if Zoo had not been faced with situations that challenged her morality, as well as her strength and determination.

Also, I really loved the uniqueness. I've never read a book that had a reality show as its setting. From what little I've read about the deceptiveness of reality television -- how far it really falls from "reality" -- I thought the author did a good job of portraying what probably really goes on behind the scenes. And, because you get to know all the contestants from the beginning, you root for them like you would if you were watching it unfold on TV. The difference is that you get to know the real people rather than the characters that are being created through careful editing. At any rate, it's a fun read. Fair warning: there are some gruesome scenes. Occasionally, I found myself skimming a little when the contestants had to gut and prepare their meals.


©2017 Nancy Horner. All rights reserved. If you are reading this post at a site other than Bookfoolery  or its RSS feed, you are reading a stolen feed. Email bookfoolery@gmail.com for written permission to reproduce text or photos.
Posted by Bookfool at 8:01 AM