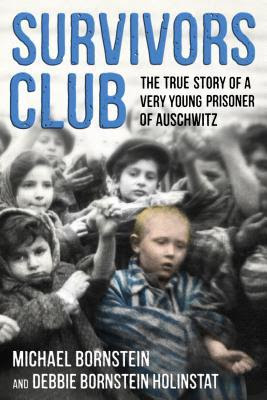 First note: Survivors Club is written for middle readers. That makes it a quick read because of its length and the writing style, but it is a strenuous read because of the content.

Michael Bornstein, who wrote Survivors Club with the help of his daughter Debbie, is the little boy pictured on the cover, colorized and showing off the tattoo on his arm. As a survivor of Auschwitz, he never felt any need to share his story - better to move on with life than focus on the horrors of his past, he thought. Even when he was asked about the tattooed number on his arm, his answer was always a light-hearted brush-off and a change of subject.

Then, one day, Bornstein saw a photo of himself, the photo shown on the cover of his book, an outtake from a Soviet film, and he was shocked to find that it was being used as evidence that the Holocaust never occurred. Compelled to finally tell his story, he enlisted his daughter and they set to work researching the family's story. It's not always told from his viewpoint because Michael Bornstein was too young to remember much of what happened and conversations are fictionalized because the authors can only imagine what was said, but the two authors were able to piece together Bornstein's family's story and doing so helped him string his patchy memories together, as well.

After describing the reason he decided to share his story, the author returns to the beginning of his family's story, before Michael Bornstein was born, when the Polish town he lived in was being invaded. He tells about how his father buried valuables in the yard just before the Nazis arrived at their house to plunder it of valuables, how his mother kept her wedding ring under her tongue. He talks about the murders his parents witnessed and the slaughter of Jews on what became known as "Bloody Monday". And, that's just the beginning. The situation declined, over the years. First, they were allowed outside the fence-free ghetto, then they were confined within it, and gradually people were sent to concentration camps. While most of the town's residents eventually ended up being marched straight to the gas chambers, his father was one of the Judenrat (the council representing the Jewish community) and he was able to keep many of his family and friends safe for years. He even managed to help hundreds escape, although eventually his his luck ran out and he was no longer able to negotiate with the German he'd been persuading and sometimes bribing for years.

I've been reading WWII and Holocaust books all my life, but this is actually the first time I've read anything that describes the perspective of someone who worked in the Judenrat. They're often looked upon as traitors because they had to make the decisions about who was sent away. The difficulty of that job really hits home toward the end, when Bornstein's father had to make the decision to put his in-laws on the list of people who couldn't remain in his small town. By this point, only a limited number who were allowed to stay behind to perform physical labor. The rest were shipped away, most to be marched straight to their deaths after a torturous train ride.

Highly recommended - Excellent writing - clear, harrowing, and riveting. I lost count of the number of times I was moved to tears. Although some of the Bornstein family died during WWII, Michael Bornstein's father was able to save many of his family members, thanks to his position in the Judenrat, and the authors are well aware of their family's good fortune.

©2017 Nancy Horner. All rights reserved. If you are reading this post at a site other than Bookfoolery  or its RSS feed, you are reading a stolen feed. Email bookfoolery@gmail.com for written permission to reproduce text or photos.
Posted by Bookfool at 2:38 PM