Leopard at the Door by Jennifer McVeigh 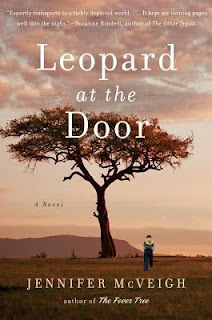 After the death of her mother, Rachel was sent to England to live with her grandparents. Now 18, she has decided to return to her home in Kenya, in spite of her father's letter advising her not to come home.

In Kenya, Rachel finds that a lot has changed. Her father has a new companion and she is not the kind, welcoming spirit that Rachel had in a mother. Bitter, intolerant, and nervous, Sarah has driven away old family friends and tries to keep an iron grip on her son, Harold. The only person who seems at all friendly is Nate Logan, and he has fallen out of Sarah's favor.

Meanwhile, the country is in political upheaval. The Mau Mau, native Africans who are tired of the imperialists taking their land and their rights, have become violent and are killing the natives who won't join them. And, they've started killing white landowners, as well. Will they succeed at uniting Africans and driving the whites away? Or will they be stopped before they reach the farm where Rachel and her family live?

As Rachel tries to find a way to coexist with Sarah and find her place in her old home, she begins a secretive relationship that, in and of itself, is an act of betrayal. But, Sarah has another secret, one from the day her mother died. Will she share her secret before it's too late?

It sounds like there's an awful lot going on but the storyline is actually pretty straighforward. Rachel goes home, there's a new woman sleeping with her dad and they plan to marry, the woman is not kind to anyone, has distanced the family from the servants, and restricts her son. Rachel's dad is under her thumb and he just wants everyone to get along. Rachel is also restricted in her movements but she finds that sewing outfits for the families who live on a stretch of their land and teaching the children helps keep her occupied and happy. Because the family is even more isolated by Sarah's brusque personality than the distance between farms alone, Rachel befriends the people whose children she teaches and the man who used to tutor Rachel but now works as a mechanic.

There's a lot of uncomfortable interaction between unlikable characters, an affair, and a political undercurrent. What I enjoyed most about Leopard at the Door was learning a little about a particular time and place: 1952 in Kenya. I had heard of the Mau Mau before, but I have no idea where, and it was fascinating reading about what led to the rebellion of the African natives against the whites. It sounds like a common theme: imperialists take over, grab all the property, try to change how the natives live and treat them as inferiors, and then the natives rebel. What keeps the pages turning is the knowledge that eventually the rebellion is going to end up on the doorstep of the main characters. There's no way around it. And, the Mau Mau are brutal. Hard as it could be to read about, I enjoyed the learning experience.

However, there were some irritations. Rachel is one of those characters who eventually begins to feel like what romance writers call a heroine who is "too stupid to live." She has witnessed something in the past, but for some reason she's kept it to herself. She knows that a man who keeps returning to her father's farm is dangerous, for that reason - not just dangerous in general, but dangerous to her. I never could understand what possible reason she could have for remaining quiet about him. I would have said (spoiler - highlight if you dare), "That guy touched me in my private places and killed someone, Dad!" Her decision to stay mum didn't make a lot of sense to me. I also was frustrated by the lack of contractions in the book. "I do not believe you," she says. I dream that I am standing with my back against the garage wall [. . . ]. There are maybe a handful of contractions used in the entire book and that bogs it down. It's a very slow read. Generally, lack of contractions in speech and narrative are rookie errors unless they're used to show a particular accent. She's not a first-time writer, but I think the author could benefit from doing a single edit of future novels with an eye toward making contractions for the sake of flow.

Recommended but not a favorite - I don't regret reading Leopard at the Door and never considered abandoning it, but it was not a favorite because Rachel's actions don't make sense, much of the time. Why would you stay in a country where people are being slaughtered or burned inside their homes if you had an option? Why would she not share information that could keep her and her family safe? And, the rest of the characters are mostly unlikeable. Nate is the exception and he is only present at times, and briefly. I would have loved it if Nate were present more, just to balance out the characterization, which leaned negative. I also found much of the book predictable. However, the ending surprised me and I liked it. And, I loved the learning experience. I gave Leopard at the Door an average rating.

©2017 Nancy Horner. All rights reserved. If you are reading this post at a site other than Bookfoolery  or its RSS feed, you are reading a stolen feed. Email bookfoolery@gmail.com for written permission to reproduce text or photos.
Posted by Bookfool at 2:14 PM