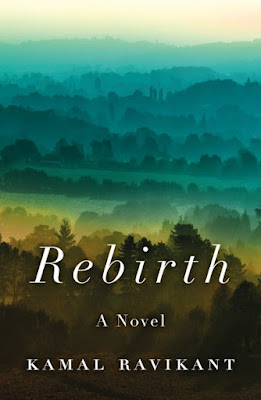 "Two partners," he whispers into my ear. His voice is hoarse. "Fear and faith. The one you dance with determines your life."

~ fr. p. 73 of Advance Reader Copy, Rebirth (Some changes may be made to the final print version)

"Il n'est pas votre blessure qui vous rend spécial."
Then he leans back, waits.
"Yes?"
"It is not your wound that makes you special."

"People have this amazing resiliency, this power to live through the worst things imaginable -- famine, genocide, you name it -- and still they survive. Not only survive, but sometimes flourish. How? How do they do it? I would venture that it's not by focusing on the 'why?' but moving ahead with the 'now what?' You might want to try that."

Rebirth is the story of a young man named Amit, who decides to walk the Camino de Santiago on a whim. Amit's father has recently died and Amit left his girlfriend abruptly to scatter his father's ashes. After spending a little time in India, he is unsure about his original plan to become a doctor. When a stranger mentions the 550-mile path taken by pilgrims for many centuries, Amit decides to give it a go, more as a delay tactic than a personal challenge.

At first, he has no real plan. He'll walk part of the Camino and then he'll make a decision. He calls his girlfriend and finds that he can't go back to the way things were, even if that's what he desires. But, as he begins to meet people on the hike across Spain and they share the wisdom of their years with him, Amit finds that he wants to continue the hike. Maybe, eventually, some of their hope will rub off on him.

Rebirth is based on the author's hike on the 550-mile Camino de Santiago and it reads very much like a Mitch Albom or Paulo Coelho book, as stated in the publicity material. I confess, that kind of "life lesson fable" tends to turn me off and toward the beginning of Rebirth, I really thought it was going to be tremendously hokey. I wasn't sure I'd make it all the way through. However, after a time, I started to warm to the story. The lessons are very much in your face, told via conversation with wise pilgrims who muse about family, tell stories about the challenges they've endured, talk about living your life instead of focusing on your ambitions, etc. But, I particularly liked the Frenchman and the final character that Amit meets: Kat. Although they were clearly in the book to impart their wisdom, those two characters felt more real to me than most and they kept me going.

In the end, I really liked the way Amit came to a decision about the direction of his life. It wasn't actually quite what I expected, and I appreciated that.

Recommended - While a book that calls itself "A fable of Love, Forgiveness, and Following Your Heart" is kind of suspect to me, I ended up enjoying Rebirth. I particularly recommend it to fans of Albom and Coelho, but if you're okay with a not-too-subtle book about finding meaning in your life, I think it's a good one. I found myself wishing I'd heard about the Camino de Santiago when I was younger and truly enjoying the trip vicariously.

I had totally forgotten about this interaction because it was the image in another book that made me choose my word of the year, "yes", but clearly it also must have moved me further in the direction of my word choice:

The monk returns, one hand raised in a blessing.
"Say yes."
I give him the finger.
"To all that happens."
Both hands, fingers.
"Say yes."

That's from p. 119 of the ARC. Clearly, I am choosing not to give the finger to this concept. It made me laugh to look back and see that I'd marked this bit and completely forgotten about it. In fact, when Amit remembered the monk, later in the book, I just shrugged at the fact that I couldn't recall their interaction at all. I didn't even bother to flip back, didn't realize I'd marked this passage.

©2017 Nancy Horner. All rights reserved. If you are reading this post at a site other than Bookfoolery  or its RSS feed, you are reading a stolen feed. Email bookfoolery@gmail.com for written permission to reproduce text or photos.
Posted by Bookfool at 1:39 PM