This will be the last post covering the books I neglected to write about in 2016. Fortunately, I kept up pretty well, in general.

Breakfast at Tiffany's by Truman Capote is a book that I had on my shelf for a while but had not gotten around to reading. It was my F2F book group's September selection and that gave me the nudge I needed. Since it's a classic, it was also my classic read for the month. I've attempted to watch the movie and found it bizarre and hard to follow, but I'm sure I would enjoy it, now. Holly Golightly is an interesting character, a woman who escaped her past and remade herself as a woman living off rich male companions. Her story is told from the viewpoint of a neighbor and friend. Now that I understand the character and her motivations, I think I would get the movie just fine. But, I haven't watched it, yet.

The Brief and Frightening Reign of Phil by George Saunders is a book that I happened across when I decided I wanted to own a copy of Tenth of December, a book I read and loved, also by Saunders. Honestly, it's probably the cover that convinced me to buy it. I love that cover. And, the content is every bit as fun and wacky. The inhabitants of a place called Inner Horner come into dispute with their neighbors in Outer Horner when their home suddenly shrinks and they no longer fit on the tiny bit of land alloted to them. A tiny, hilarious book that I presume is an allegory (but, honestly, I just don't know), The Brief and Frightening Reign of Phil is bizarre, thought-provoking, strangely insightful, and also one of my favorite reads of the year. I'm glad I bought it; I plan to reread this one regularly.

Leveling the Playing Field: The Democratization of Technology by Rod Scher was not meant to end up in the end-of-year batch, review-wise. I think I must have not realized I hadn't reviewed it at the blog because I put up a review at Amazon when I was asked to do so. Mea culpa. By "the democratization of technology", the author means that most inventions go from being hard to acquire and expensive to cheap and widely available. He starts out with the invention of fire and then progresses to such things as books (how they became more widely available with the advent of the printing press), computers, 3D printers, The Internet of Things, and the GPS. I had particular favorites amongst the chapters; I can't say why, but the book is fascinating and very readable. A side benefit to this book is that the author described a few websites, one of which I zipped off to check out. I ended up finding a perfect Christmas gift at that website, so thank you, dear author, for that.

The View from Flyover Country: Essays by Sarah Kendzior is an e-book that I purchased after reading a ton of Kendzior's tweets. There's a bit of repetition within the essays but that was not a bad thing for me because it helped clarify some of what she had to say about things like the difficulties faced by a younger generation in which the norm is quickly becoming a requirement to work an unpaid internship in order to qualify for a job and why internships and other poorly paid introductory jobs mean some fields are dominated by people who are already economically advantaged. Although I can't recall the other topics, a good portion of the essays dealt with racial and economic inequality. A very good read and it's notable that she has a doctorate in authoritarian regimes, so her tweets about the incoming Presidential administration are terrifying but informative. 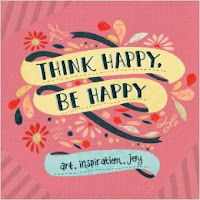 Think Happy Be Happy has no credited author but is a collection of inspirational quotes, sayings, and some miscellaneous fun things like playlists. I've got a flag marking one of those, the "Fearless Playlist" with songs like "Just Say Yes" by Snow Patrol. On the opposite page it says, "'I am not afraid of storms for I am learning how to sail my ship.' -- Louisa May Alcott " So, it's basically a little book of, as it says, "Art, inspiration, joy," very upbeat and beautifully illustrated. One of my favorite pages says, "Hell yes!" with a little devil in a burning background. It was part of the reason I chose "Yes" for my word of the year. I haven't torn that page out, yet, although I'd like to. I'm not so hot at damaging books. 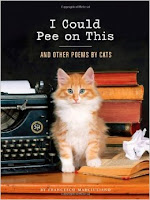 I Could Pee on This and Other Poems by Cats by Francesco Marciuliano is just as silly as you'd expect but it has photos of cats and it made me laugh so I'm glad I finally managed to acquire a copy. I think I may have mentioned this, already, but I stood in Target and read bits and pieces of I Could Pee on This when it was a fairly new release, maybe a year old. It made me smile, so I put it on my wish list and I just finally found it at a price I found tolerable when we were visiting Kiddo, a couple weeks ago. While the guys went into an office supply store to find something to organize papers, I sat in the car reading and laughing. I'll reread this one many times. It's worth owning a few small things that are guaranteed to make you smile.

That's it! I will post my end-of-month for December (it will be brief), publish the full list of books read, and then I'm done with 2016!!

©2017 Nancy Horner. All rights reserved. If you are reading this post at a site other than Bookfoolery  or its RSS feed, you are reading a stolen feed. Email bookfoolery@gmail.com for written permission to reproduce text or photos.
Posted by Bookfool at 3:00 PM