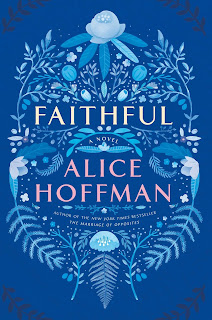 I have to hurriedly write about Faithful because it's due back at the library, today. Hurry, hurry! I'll be posting a Tuesday Twaddle post, tomorrow, instead of Monday Malarkey because I want to go ahead and get this review posted.

Faithful by Alice Hoffman is the story of Shelby Richmond, a teenager who is involved in a terrible car accident with her best friend, Helene. Shelby was only slightly injured. She has vague memories of seeing an angel and being covered with a warm coat, then finding out she was really fine while her friend was permanently damaged. Some think Helene works miracles and people wait in line to see her, hoping for miracles of their own. Shelby is skeptical of Helene's ability to work miracles and can't bear to see her.

Shelby has received postcards encouraging her to start living, again, since her accident. But, she doesn't know who is sending them and she is unable to determine how to move on.

After Shelby's accident, she becomes so deeply depressed that she's hospitalized for several months and then she turns to drugs and spends most of her time sleeping. Her drug dealer is a boy from her high school, Ben. When Shelby and Ben begin to spend time together, it becomes clear that Ben wants much more than to be her drug dealer. But, Shelby is not sure she will ever be able to function, again. Can Ben help her through her crisis? Who is sending Shelby the encouraging postcards that are the one light in her life?

I'm just going to quickly tell you what I loved about Faithful. It goes from the time when Shelby is depressed, post-hospitalization, to sometime in her twenties. While she eventually comes to terms with her guilt and depression, Shelby is forever changed. But, what transforms her is her love of animals and this I loved with a passion. I'm an animal lover and I know how good it feels to take in a fur friend who has been rejected and may not otherwise have ever found a home. I could relate to the way her rescue of animals served as her salvation.

I won't give away the details of the book but Shelby also becomes involved in an unusual and lasting friendship, and is loved by Ben in a way that helps her to take the baby steps back into life that she might not otherwise have been able to make. You're never certain whether or not she and Ben will last because Shelby is still so damaged, but in that regard the book felt oddly realistic, if a bit disappointing.

Highly recommended - I liked Faithful more than most of my friends did, partly because of the fact that the pages flew and I cared about Shelby, partly because I found it plausible and oddly satisfying, even though parts of the book are disappointing. You may want her to make a certain decision, for example, and she goes the opposite direction. I overlooked those discomforts because Faithful is, in the end, a book that peers around dark corners to find the bright rays of light that keep a person going after a life-changing crisis.

©2017 Nancy Horner. All rights reserved. If you are reading this post at a site other than Bookfoolery  or its RSS feed, you are reading a stolen feed. Email bookfoolery@gmail.com for written permission to reproduce text or photos.
Posted by Bookfool at 1:09 PM