The Nightingale by Kristin Hannah - Review and F2F report 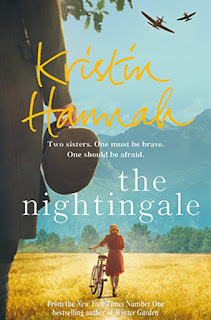 I finished The Nightingale in tears, the night before last, on the eve of my book group's discussion. Remind me to put it on the tearjerker list for 2017. I was very moved.

The Nightingale is the story of sisters Isabelle Rossignol and Vianne Mauriac. Isabelle was just 4 years old when their mother died, Vianne old enough that she was married just a few years later. Both were wounded by the rejection of their father, who suffered from PTSD and was never the same after the first World War. Unable to cope with the loss of his wife, he sent the two girls to live in their second home with a stranger in charge of their care.

The book begins as Vianne's husband, Antoine, is leaving to serve in WWII and Isabelle is on the verge of being kicked out of a finishing school. When she arrives in Paris, Isabelle is determined to stay with her father but then the city is occupied by Nazis and he sends her to live in the town of Carriveau with Vianne, thinking she'll be safer. What follows on her journey to Vianne's is a horror that Vianne simply cannot comprehend when Isabelle tries to explain. Isabelle has seen the cruelty of the Germans and will do anything she can to resist while Vianne is in denial.

Isabelle leaves Vianne's house to do what she feels she must. Then, a Nazi is billeted with Vianne and her daughter. What will happen to Vianne and Isabelle? Will they survive the war? What has become of the Frenchmen who didn't return after the occupation began? Will any of Vianne's Jewish friends and their children survive?

The Nightingale is an amazing book. One of the things my friend and I discussed over dinner, before we went on to book group, was the fact that The Nightingale covers the entire war from the French perspective, from when the men leave home to fight to the liberation of the remaining captives from concentration camps. That alone is an amazing feat and a feature of the book that gives it more depth and perspective than many WWII books I've read. And, the scenes are incredibly vivid. When you read about one of the main characters, you have that "in their shoes" sensation. I always felt like I could feel the cold and the hunger and the pain. It was a visceral experience. In fact, that was one thing that was brought up in the F2F gathering: a couple people said they could not imagine the amount of self-restraint that it would require to slowly, slowly, slowly ration out what little food one had. A couple people said that the scenes about the lack of food made them hungry.

I don't want to say too much about the plot of the book, apart from the obvious. Isabelle is on the ground during the bombing of the refugees leaving Paris and that's crucial because it firms her resolve not to quietly give in to the enemy. It's clear that she will become a part of the Resistance but what she will do, of course, you won't know till you get there. I don't want to give that away. The level of risk to her increases as the war progresses and it is entirely by choice. She is absolutely heroic, almost mindlessly so. You can't help but admire her.

Vianne, on the other hand, is more naive about the threats to her family and plays it safe for a very long time. Eventually, she feels compelled to do her part and is equally heroic but in entirely different ways. This leads to another thing we talked about in book group: the fact that The Nightingale makes the horrors of living in an occupied country so clear. One of our group members said, "I would rather have been a man at the front line being shot at than a woman left behind."

Highly recommended - I don't feel like I have adequate words to describe the breadth and meaning of this book. It is as genuine as a WWII novel can be, describing with detail the unfolding horror that ordinary citizens lived through in Occupied France. It's a hard read, but exceptional.

Side note: While I have known I would read The Nightingale for a long time because it's a WWII novel, I honestly dismissed all the praise because I've always thought of the author as purely a romance writer (this is the first time I've read her but it will not be the last). Not that I don't think there are excellent romance writers because I know better, but I just don't read a great deal of romance. There are moments that you can see the romance writer peeking through, definitely. But, they're few and far between. The Nightingale is a gritty novel, in many ways, definitely not for the faint of heart. Kristin Hannah did not tippytoe around hardship. She made you feel it to your bones.

A note on the cover: I ordered my paperback copy from Book Depository, in case you're wondering about that cover. I presume it's the UK edition. I chose it because I prefer paperback.


©2017 Nancy Horner. All rights reserved. If you are reading this post at a site other than Bookfoolery  or its RSS feed, you are reading a stolen feed. Email bookfoolery@gmail.com for written permission to reproduce text or photos.
Posted by Bookfool at 9:36 PM