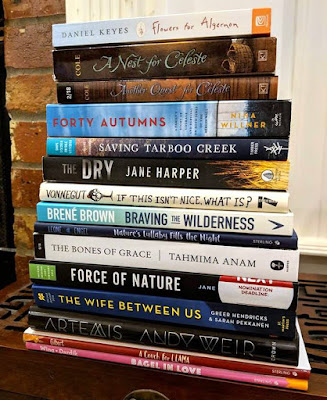 1. Saving Tarboo Creek by Scott Freeman and Susan Leopold Freeman (illustrated) - A wonderful memoir about a family who purchased an abused plot of land and then set out to restore both the land and the creek that ran through it, making it healthy and supporting wildlife that had disappeared (including salmon).

2. Forty Autumns by Nina Willner - The story of a family divided by the Iron Curtain. One child of this large family escaped to the West. The rest remained in East Germany. Nina Willner is the child of the one who escaped and eventually ended up in America. A terrific family memoir with some tense scenes that took place when the author was a U.S. Army Intelligence officer working in Berlin during the Cold War.

3. The Bones of Grace by Tahmima Anam - Just as she's preparing to leave Harvard to dig up the bones of a walking whale, Zubaida meets Elijah and they spend her final three days in Cambridge together. Told in past tense, the story is about Zubaida's tragic choice not to follow her heart and her search for her birth mother.

4. Braving the Wilderness by Brené Brown - I had a little trouble understanding what this book (nonfiction) was about, but I think it was about being true to yourself and the importance of reaching out to others. Don't quote me on that, though.

5. The Dry by Jane Harper - Aaron Falk returns to his tiny hometown in Australia for the funeral of his friend's family. Everyone assumes Jake killed his family and himself (except for his infant daughter) because of the drought that's causing so many local landowners to lose their livelihoods. But, Jake's parents think he was murdered. The first in the Aaron Falk mystery series.

6. Milk and Honey by Rupi Kaur (e-book) - A very short book of poetry that talks about love, abuse, and other subjects. Trigger warning for those who've been assaulted. Illustrated by the author.

7. If This Isn't Nice, What Is? by Kurt Vonnegut - A collection of a half dozen speeches by Vonnegut, mostly graduation speeches.

8. A Nest for Celeste by Henry Cole - Celeste is a basket-weaving mouse who is looking for a home. From her little hole in the wall, she moves to the bedroom of an the nature artist Audubon's apprentice, then to a dollhouse in the attic of the same home.

9. Another Quest for Celeste by Henry Cole - After she goes outside to forage for food, Celeste falls asleep in the wrong place and ends up on a cart and then a steamboat. When the steamboat sinks, she makes it to land and lives in the forest, for a time, then becomes friends with a young Abe Lincoln.

10. Bagel in Love by Natasha Wing and Helen Dardik - Bagel wants to join in on a dance competition but he can't find a partner until he meets the lovely Cupcake.

11. Flowers for Algernon by Daniel Keyes - Charlie is profoundly retarded but hardworking and determined. When he's chosen for an experimental surgery, he goes from having a low IQ to way above average intelligence. But, the experiment is doomed to fail. Written as a series of journal entries that show Charlie's progression.

12. The Wife Between Us by Greer Hendricks and Sarah Pekkanen - Richard has been married, before. Now, his former wife is shattered and only wants to warn his future bride of the dangers in store for her. Will she be able to warn her in time?

13. The Radium Girls by Kate Moore - The true account of the women who painted watch dials, airplane controls, and other items with luminous paint made from toxic radium and how the small industry fought to keep the reason for the painters' deadly health issues secret.

14. Nature's Lullaby Fills the Night by Dee Leone and Bali Engel - A gentle nighttime poem to relax little ones, filled with nature references.

15. A Couch for Llama by Leah Gilbert - The story of a family who goes to buy a new couch. The couch flies off the roof of their car and is found by a llama, who makes it his own. But, the family needs the new couch, so they replace it with their old one and everyone is happy.

16. Artemis by Andy Weir - Jazz is a smuggler living in the moon colony Artemis. When she's offered a huge sum of money to sabotage some machinery, she agrees. But, she's in for more than she bargained for and the entire moon colony may end up paying.

17. Force of Nature by Jane Harper - The second in the Aaron Falk series, this time the story of a woman who disappears while on a company outing with four other women. Will she be found dead or alive? Was her help investigating her employer's dangerous connections responsible for her disappearance or did she simply become lost?

OK, deep breath. This was a fantastic month for quantity, although there were a few books I didn't like or even quite "get".

Absolute favorites were Saving Tarboo Creek, Forty Autumns, The Dry, Force of Nature, Nature's Lullaby Fills the Night, A Couch for Llama, and Flowers for Algernon. All were terrific reads.

I liked Artemis, the Celeste books (especially Another Quest for Celeste), and The Radium Girls, although the latter was tough to read because it's about the willingness of people to let other people die for the sake of the corporate bottom line and the Celeste books contained a surprising number of violent scenes. I liked the writing in The Bones of Grace but found the story lacking. And, while I enjoyed Artemis, it is the typical disappointing sophomore effort and I briefly considered abandoning it. I'm glad I stuck it out for the exciting scenes in the end.

I was often lost while reading Braving the Wildnerness, although it had its moments. Similarly, If This Isn't Nice, What Is? had its moments of wisdom but was repetitive enough that it's not worth keeping. In the future I'll stick with Vonnegut's fiction. Milk and Honey and Bagel in Love were my least favorites but I loved the illustrations in Bagel in Love and simply didn't love the storyline, while I thought Milk and Honey was pretty much the worst thing I've read in ages (and I only finished it because it was short).

©2018 Nancy Horner. All rights reserved. If you are reading this post at a site other than Bookfoolery or its RSS feed, you are reading a stolen feed. Email bookfoolery@gmail.com for written permission to reproduce text or photos.
Posted by Bookfool at 8:32 AM