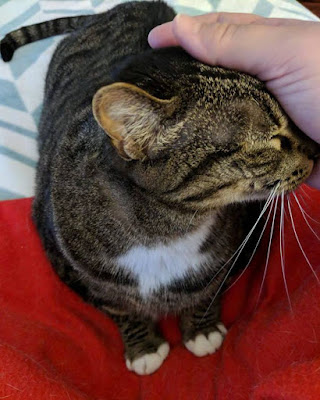 
Nothing, nada, zero, zippo, zilch. So, you get a kitty pic. After all those books that I posted last week, I'm thinking it's good that I had a no-arrival week, but it was kind of miserable in its way. I'm so used to at least one book showing up on my doorstep that I strongly considered making a panic purchase, just so something would arrive. I talked myself out of it. Whew!

The kitty pic, by the way, is a shot of one of my favorite Fiona quirks. When I pet her head, she likes to turn her face and stick her little nose in the palm of my hand. It is so trusting of her. I just love that. I finally got a shot of her doing it, this weekend, and I was so excited. Sometimes it's hard to capture those cute, quirky little things they do.


This was a pretty terrific reading week. Al Frank, Giant of the Senate was miles better than I expected it to be, The Hate U Give is an online discussion book and I finished it ahead of schedule so I'm enjoying just sitting back and reading the comments by other readers and learning a bit from them, and Being Mortal is one of those rare, meaningful books about life and death that falls into the "Everyone Should Read This" category.


An interesting variety, eh? Week One, 204 pages of Don Quixote down, roughly 800 pages and 4 weeks to go. It's an easy read but I think spreading it out over 5 weeks is going to work well. It's a bit repetitive and, as Bryan of Still an unfinished person has mentioned, it's going to be "a long haul". So, having buddies to read with also keeps me going.

I found Lost in Austen on Britbox, yesterday, and I told my husband that I just wanted to watch a few minutes to see what it was like. He nodded. An hour or two later, we agreed that it's loads of fun and we're glad we watched the whole episode. Huzzybuns said, "I knew you'd watch it all." Yeah, I kind of knew it, too, but I thought I should at least try to only watch a little bit.

I'm still watching Doctor Who, also. I guess that will go on for a long, long time, since I started at the beginning of Dr. #1's episodes, although a lot of the early episodes are either missing or unavailable. Still, I'm a little less than halfway through the first Dr.'s years. So exciting to be able to see them, bad as they often are. The series of episodes that I watched this week took place in a space ship and down on the planet of the Sensorites. It had a few hilarious moments in which the cheap sets gave themselves away and the hairstyles of the women changed just a touch. "Ah," you may say to yourself, while watching the two episodes,"so, this is where they broke for the day, came back, and everyone's hair was styled." Hahaha. I love it for the quirks, for sure.

I got two postcards in the mail and meant to snap their picture but didn't get around to it, so if there aren't any arrivals next week, maybe I'll manage to get a picture of them to show off. Thanks for the postcards, Kelly and Carrie!


©2018 Nancy Horner. All rights reserved. If you are reading this post at a site other than Bookfoolery or its RSS feed, you are reading a stolen feed. Email bookfoolery@gmail.com for written permission to reproduce text or photos.
Posted by Bookfool at 4:31 PM