Only Killers and Thieves by Paul Howarth 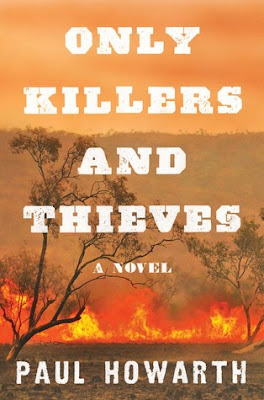 
Two brothers are exposed to the brutal realities of life and the seductive cruelty of power in this riveting debut novel -- a story of savagery and race, injustice and honor, set in the untamed frontier of 1880s Australia.

In Only Killers and Thieves, it's 1885 and the McBride family is trying to survive a terrible drought in Queensland, Australia. When the two teenagers in the family, Tommy and Billy, stray onto their neighboring landowner's property, they see something shocking and are threatened by neighbor John Sullivan. Not long after, tragedy strikes and a gun given to a former native hired hand is found on the McBride property.

Tommy and Billy escaped the tragedy and now they're out to find a killer. But, with Sullivan and the chief of the Native Mounted Police, Noone, leading the way, they find that their goal is not at all what they'd intended. One of the boys goes along with the brutality of Sullivan and Noone; the other is threatened and has no choice but to join in the atrocities or risk his own death. What will happen to Billy and Tommy? Will they find the killer they seek or end up going back home without tracking him down? Was their hired hand even the person responsible?

OK, deep breath. There's a lot to this story but I don't want to go into any detail to avoid spoilers. What I will tell you is that it's based on historical events that I wasn't aware of. During the late 1800s, there was a native police force that was involved in the slaughter of fellow Aborigines in Australia. The author paints this as a life or death choice. The white people were killing off the natives so thoroughly that the only way to survive was to join them. As in most cases of native genocide, the ones doing the killing described the Aborigines in demeaning ways. They were only killers and thieves, they ate their children, they were savages, etc.

Throughout Only Killers and Thieves, the boys make an assumption about who is responsible for the tragedy at their home. I had no trouble figuring out whether this was a right or wrong assumption but I didn't know the reasoning behind the answer and that kept me reading. Also, the writing is excellent. However, if you're squeamish about graphic violence or rape scenes are a trigger, you might want to avoid this one. It's brutal. I remember thinking, at some point, that the ending had better be a good one or Only Killers and Thieves was going to get a really low rating. Fortunately, the ending is really quite lovely, so I ended up giving it 4 stars. But, it was definitely the kind of book that can give a person nightmares.

Recommended with warnings for graphic violence including rape - A harsh but beautifully written story about the senseless killings of Aboriginal people in Australia and the men, including natives, who perpetrated mass murder. If you can tolerate the violence, the ending is very satisfying.


©2018 Nancy Horner. All rights reserved. If you are reading this post at a site other than Bookfoolery or its RSS feed, you are reading a stolen feed. Email bookfoolery@gmail.com for written permission to reproduce text or photos.
Posted by Bookfool at 1:19 PM