I've got lots of book stack photos, today, since a few people asked me to post my final bookstore purchases. The first stack is arrivals that came in the mail. 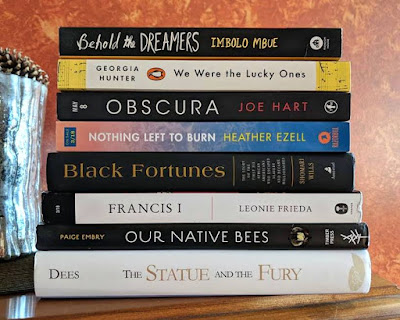 
From this batch, I was most excited by Black Fortunes and Our Native Bees. I'd just been fretting about the fact that I couldn't think of any titles I had on-hand to read for Black History Month when Black Fortunes arrived on my doorstep (literally, the day I was thinking about it). Our Native Bees is about a subject that I consider incredibly important: the fate of our native bees. It is a stunningly beautiful book, chock full of gorgeous photos.


And, the final book purchase from our local bookstore closing (several images!): 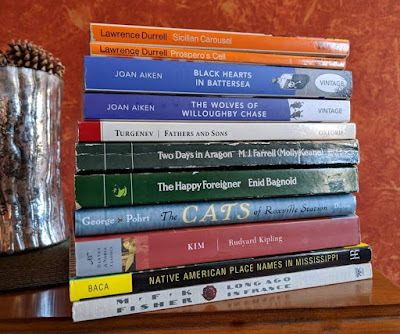 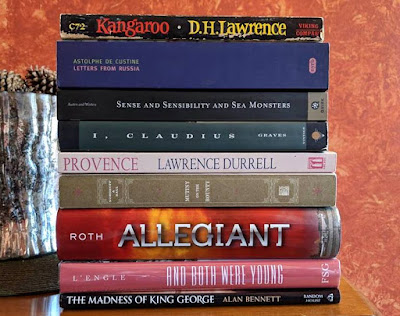 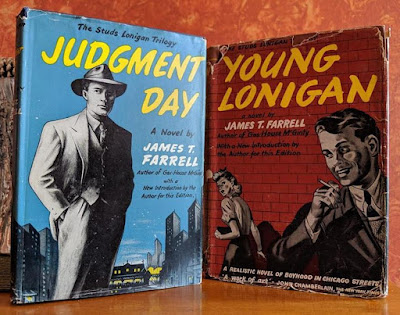 And, the last two books, I confess, were bought solely because I thought the covers were cool. They're two of the three books in the The Studs Lonigan Trilogy:


I know you can see the titles just fine but I would feel weird not listing them. I've heard of this trilogy, but I don't know why. Maybe they were made into movies or a TV series? Studs Lonigan is definitely a familiar name. I will probably read them, not just admire them, but it will be interesting to see if I can find the third book in the trilogy.

Sometimes my first thoughts (written by email to friends in an internet book group) are worded best but I can't find them in that mess known as my "outbox" when I get around to reviewing. I just came across my thoughts on Jane Harper's writing (written as I was reading one of her books) while cleaning my outbox, so I figure they're worth sharing:

I'm enjoying the fact that the author tells you just enough to leave you room to form your own theories but still feel like you have no idea where she's taking you. I'm also finding that it's easy to hear the Australian accent in my head. It just seemed to come naturally from the beginning.


I would have shared that thought in my recent dual review of The Dry and Force of Nature if I'd come across it, last week.

Down and Across is a tour book and the review will be posted on the 8th of this month.


I came across some immediate thoughts about Braving the Wilderness by Brené Brown, as well:

It's a book about being true to yourself and the importance of connecting with others.

Followed by, "At least, I think it is." I waited too long before reviewing to recall what exactly I thought the book was about, as I was reading, so I thought that was worth sharing.


Don Quixote and The Hate U Give are both group reads. When friend Ryan mentioned the fact that he'd not yet gotten around to reading Don Quixote, I asked him if he'd like to buddy read it and he replied with an enthusiastic, "Yes!" We asked if anyone wanted to join us and two more people said they'd like to join in, so I created a closed Facebook group. Bryan of Still An Unfinished Person posted about joining in in this post: Tilting at Windmills, which includes the schedule. So, you can see I'll be reading that one for quite some time (the schedule spreads over 5 weeks). It's one heck of a chunkster but loads of fun.

I hope Brit Box doesn't turn me into a TV junkie, but boy am I enjoying watching old British shows. We've dipped into quite a few: Dr. Who, Not the 9 O'Clock News, Upstart Crow, and the old Dirk Gently. I watched the entire Dirk Gently series, which only consisted of a pilot and three episodes. Kind of disappointing that they didn't take it any further. I like the recent Dirk Gently's Holistic Detective Agency, which is mind-bendingly bizarre but the older version falls closer to what I remember of the book by the same title -- the only Douglas Adams book I ever actually disliked, actually. Strange that I've so enjoyed the TV versions.

©2018 Nancy Horner. All rights reserved. If you are reading this post at a site other than Bookfoolery or its RSS feed, you are reading a stolen feed. Email bookfoolery@gmail.com for written permission to reproduce text or photos.
Posted by Bookfool at 3:00 PM