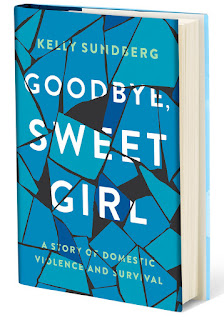 It started out well. He was kind, solicitous, emotional, affectionate. He seemed to love her like nobody else ever had. There were things about him that concerned her, like the way he let a friend behave around her, but nothing to indicate he would ever do her harm. She was pregnant and he was happy about it. So, they married.

And, then the abuse began. It began with something that sounds harmless enough. He threw a shoebox at her. A shoebox, empty, doesn't weigh much and can't do much damage, right? But, abuse escalates. The longer they stayed married, the worse the abuse became -- until she had to wear long sleeves to cover the bruises on her arms and couldn't explain the bruising on her face and the cut lip.

Goodbye, Sweet Girl is a memoir that begins with the moment Kelly Sundberg realized she had to get out of her abusive marriage to save herself and her son. It starts with a harrowing scene in which she managed to escape their apartment inside a college dormitory where they worked as the resident parents. Only the people who worked in the dorm were present, but it was the first time she'd thought only of saving herself long enough to give away the fact that she was being abused.

Sundberg returns to the beginning of her story to tell about how they met, the times when his behavior may have been a warning that she missed, how they married after she discovered she was pregnant and he became abusive shortly after their marriage, the abuse slowly escalating, the injuries becoming worse.

Recommended - Goodbye, Sweet Girl is a rough read but an important one because the author does a terrific job of showing how abuse can start out seeming like nothing at all. Throwing a shoebox? It sounds perfectly harmless, right? But, there's a pattern to abuse. It becomes more dangerous, harder to run away, more likely to end in death. That's exactly what happened to the author; it slowly escalated until the dorm incident (which got them thrown out of their apartment). Even as she was in the process of divorce, her father was skeptical and her employer tried to fire her. Why is it that women are punished for being abused? Fortunately, she stood up for herself and managed to keep from being fired while her husband remained employed.

Goodbye, Sweet Girl is very well written, incidentally. It's been a long time since I've read a memoir about domestic abuse but I don't recall the writing itself ever really standing out. Kelly Sundberg is an excellent writer.