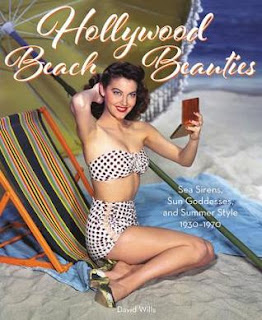 Hollywood Beach Beauties by David Wills is a book of photographs, advertisements, and movie posters from the Thirties to early Seventies. Its subtitle does a good job of zoning in on the topics described in the text of the book (which was minimal, the book is mostly images and is divided by decade): "Sea Sirens, Sun Goddesses, and Summer Style, 1930-1970".  I'll admit up front to ignoring the subtitle because I was mostly in it for the vintage photography. I was curious about how the photography was done. For example: the changing poses and settings over the years. So, let's talk about the photography, first.

There were some really interesting things to note about the photography, but there were three things that really jumped out at me:

1. Poses have changed but not all that much - There are some photos, like the cover image, that look ridiculously posed and unnatural. And, I don't recall seeing models posing in bathing suits with high heels, before. But, there were also casual poses that have become more common in our era: the joyful beach photos in which models (the vast majority were also actors, not just models) jump in the air or splash in the water, for example, but there was a mix of happy and sexed-up photos. Note: from a fashion standpoint, it's extremely fun to see shoes of the various time periods.

2. Huge change in the body styles of models - While models in all 4 decades described were slender and beautiful, they were also curvy in earlier days, particularly in the 50s. And, quite a few of the early starlets who modeled bathing costumes were short. So, a good portion of them would be considered overweight by today's ridiculous modeling standards. It's notable that they looked every bit as terrific. You can't help but quickly note tricks to extend the length of legs, like the high heels, standing on tiptoes, toes pointed. I also noticed that the models tended to hunch their shoulders and clearly were pulling in their stomachs in many of the photos.

3. Almost no touch-ups - While some of the movie posters and advertisements were clearly manipulated (and many of the advertisements were artistic renditions rather than photographs), the vast majority appear unretouched. Some of the color photos, in fact, show that the models had skin that was burned in places. Poor Grace Kelly looked burned to a crisp in a beach photo from To Catch a Thief. A couple images also showed tan lines.

There's something deeply satisfying in the realization that women can still look utterly fabulous when nobody has gone in and removed the little pooches of skin that pucker above a bathing suit, thinned their thighs or made skin flawless with a computer program. I didn't expect to notice such details; as I mentioned, I was more interested in the changing photography than the human form or style. But, everything about the images ended up fascinating me.

Less interesting was the text, which I thought was a hot mess. While mostly about the crossover between modeling and acting and the changing styles of bathing suits, the author had a tendency to bombard the reader with names of actors who modeled, photographers, artists, and bathing suit designers . . . but then most of the photographs didn't show the specific suits or images described. At first, I went looking for particular images. One of the first models mentioned was not, in fact, shown at all. So, that baffled me. Then, I realized the author had chosen photos that matched the particular styles described without choosing the exact images that he had decided to highlight. I didn't care for that at all and I found the text really clunky and frustrating. But, at the same time I managed to learn a bit about changing styles, which was more interesting than I anticipated. I had no idea that early one-piece bathing suits of the type we wear today were knit and therefore very heavy when waterlogged. Nor did I realize that the early versions of stretchy bathing-suit material were quick to lose their shape. You couldn't just buy a swimsuit for the season, wear it for your daily dip in the pool, and expect it to last all summer.

Recommended to a specific audience - If you're interested in the photography alone, you might find this book a bit disappointing. But, I still enjoyed it. I just found that it held my interest for different reasons than I anticipated. It's more fascinating for the view of cultural and fashion changes than for the photography (my chief interest). So, I'd particularly recommend Hollywood Beach Beauties to people who are interested in fashion, with focus on bathing suits (although there is one photo of Audrey Hepburn in shorts -- totally out of place, I thought). It's also of interest for how women in movies were the models of most of the time period covered. And, if you have a fascination for old movie posters, you might enjoy how the beach images were incorporated into movie posters.