Letters to My Palestinian Neighbor by Yossi Klein Halevi 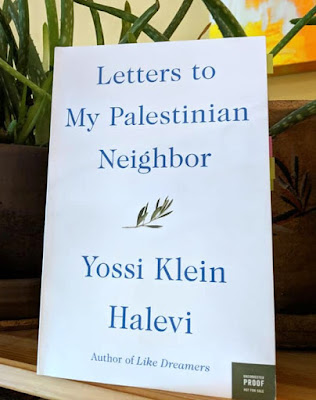 However differently we express it, . . . faith shares an essential worldview: that the unseen is ultimately more real than the material, that this world is not a random construct but an expression, however veiled, of a purposeful creation. That we are not primarily bodies but souls, rooted in oneness. For me, the only notion more ludicrous than the existence of a Divine being that created and sustains us is the notion that this miracle of life, of consciousness, is coincidence.

I requested an ARC of Letters to My Palestinian Neighbor by Yossi Klein Halevi, in part because I was hoping that it would shed some light on the Israel/Palestine situation. The book is a set of letters addressed generically to the people living near him, any Palestinian who may care to read one Israeli's thoughts on their territorial dispute, his beliefs and those of his people, what he proposes the most workable solution may be and why. It is absolutely not a primer in the history of the area and it is naturally a bit biased toward the Jewish point-of-view, although Halevi does his best to stay open-minded. If you've been reading my blog, you'll know that I did some online research and purchased a couple other books when I realized I just didn't know enough to fully understand this book.

My online research was enough to get a basic understanding and the two books: Israel/Palestine by Alan Dowty (which is very deliberately unbiased) and Gaza: An Inquest into Its Martydom by Norman G. Finkelstein (which may possibly be biased toward the Palestinian side but I won't know till I read it) should fill in the gaps. The only thing I lack, at this point, is maps. I really could use a nice atlas -- online maps just don't cut it. Unfortunately, I haven't owned an atlas for quite a while, so I just had to make do with what I could find online when Halevi mentioned particular locations.

I found Letters to My Palestinian Neighbor thoughtful and carefully written. The author's story alone is quite interesting. Halevi is American by birth, but he's deeply religious and knew by the time he was about 13 years old that he would want to return to Israel (where he had recently traveled) permanently, someday. As a Jew, he would be granted citizenship. He eventually made that move and has been an Israeli citizen for over 30 years. From his home on a hill, he can see his Palestinian neighbors. Halevi believes in a two-state solution, but I think it's best if I share a few quotes from the book that I think do a good job of expressing his thoughts and/or personal beliefs.

The notion of a people chosen by God wasn't intended to bestow privilege but responsibility. Jewish history attests that this role carries more burden than glory. The classical way Jews understood their own history was as the story of a people failing to live in the intensity of God's presence. This is the story told by the Hebrew Bible -- a national epic astonishing in its relentless criticism of the people it is supposedly intended to celebrate.

Even as we seek a two-state solution, we will likely remain with a two-narrative problem. But that historical divide must not prevent a political compromise. I honor history--up to the point where it no longer inspires but imprisons. Accommodating both our narratives, learning to live with two contradictory stories, is the only way to deny the past a veto over the future.

We are trapped, you and I, in a seemingly hopeless cycle. Not a "cycle of violence" -- a lazy formulation that tells us nothing about why our conflict exists, let alone how to end it. Instead, we're trapped in what may be called a "cycle of denial." Your side denies my people's legitimacy, my right to self-determination, and my side prevents your people from achieving national sovereignty. The cycle of denial defines our shared existence, an impossible intimacy of violence, suppression, rage, despair.

That is the cycle we can only break together.

"Justice, justice, shall you pursue," commands the Torah. The rabbis ask: Why the repetition of the word "justice"? My answer has been shaped by our conflict: Sometimes the pursuit of justice means fulfilling two claims to justice, even when they clash.

With the notable exception of Jordan, which granted Palestinian refugees citizenship, the Arab world has kept Palestinians as refugees, stateless and in camps, politicizing their misery as permanent evidence against Israel.

Meanwhile, other humanitarian emergencies demand attention. There are, at last count, some sixty million refugees around the world, many of them from new crises in the Middle East. The special status for Palestinian refugees is unsustainable. And given the certain opposition of any Israeli government to right of return to Israel proper, the issue has become one of the main obstacles to your hopes for national sovereignty.

The biblical prophecy is that, in the end of days, the nations will gather in pilgrimage to the Mount, and God's House will be "a House of Prayer for all people." I don't know how that will happen. Nor is it my religious obligation as a Jew to plan that moment. There is a wise rabbinic parable about how the future Temple will appear: in a cloud of fire, descending from Heaven. The parable is a warning, especially to Jews today who once again conrol Jerusalem: Rebuilding the Temple is not in your hands. Leave the Mount to God.

Recommended especially to those who have a working understanding of the Israel/Palestine situation - I went into the reading of Letters to My Palestinian Neighbor knowing essentially nothing about Israel/Palestine. I had a lot of questions. I didn't understand the history, why many of my Christian friends blindly side with Israel, or what the potential options for solving this unique land dispute might be. I'd just started reading the book when the new American embassy was opened in Jerusalem and violence broke out, leading to the deaths of a substantial number of Palestinians. Letters to My Palestinian Neighbor reflects the opinions of one person, but it's a book that anyone knowledgeable about the situation can learn from.

If you're as unknowledgeable as I was (things are improving), I highly recommend reading up on the Israel/Palestine situation before diving into Letters to My Palestinian Neighbor. What you'll get from the book is a particularly pointed understanding of the Israeli side. The book is not meant to be neutral but he does his best to describe his beliefs with empathy. The whole idea is to share his side and to explain that he believes a solution is feasible. Read it with an open mind and heart. I think Christians can learn a great deal from this book, as well. The final quote, above, particularly resonated with me. I'm really glad I read this book because it has led me to dive into a new learning experience that I'm enjoying.

Note: I'm in the market for an atlas, now. Suggestions are welcome.

©2018 Nancy Horner. All rights reserved. If you are reading this post at a site other than Bookfoolery or its RSS feed, you are reading a stolen feed. Email bookfoolery@gmail.com for written permission to reproduce text or photos.
Posted by Bookfool at 7:31 AM