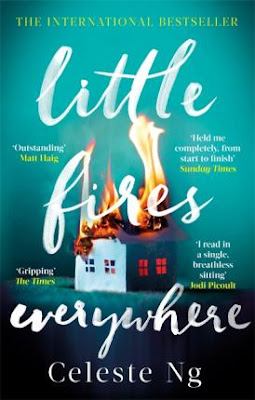 At the beginning of Little Fires Everywhere, the Richardson family watches as their house burns, everyone assuming the younger daughter, Izzy, is responsible. Then the author takes the story back in time to the arrival of Mia Warren, a photographer/artist who has lived a bit of a vagabond life with her daughter, seldom settling anywhere for longer than a matter of months. Mia has promised her daughter Pearl that they're finally going to stay in one place and they've moved into the Richardsons' rental. Is Mia running from something or is she simply moving for the sake of her art? What led Mia and Pearl to slide their key into the Richardsons' mailbox and head out of town just before the fire broke out?

I read Little Fires Everywhere for group discussion and I pretty much loved everything about it. It's one of those books in which the characters are so vividly described that you feel like they could step right out of the pages. And, while I have forgotten what I may have thought the theme to be, at the time I finished I felt like I had an understanding of what the author was trying to say when I closed the book.

Other than that, I had little to say about the book and was mostly silent during my book club's meeting. In fact, I was asked why I was so quiet, for once, and I said I liked the book a lot but I just didn't feel like I had anything to say about it -- other than the fact that I particularly loved reading about Mia's photography. One of our members noted that Little Fires Everwhere is mostly about the women: Mia, Mrs. Richardson, Pearl, and the two Richardson girls are the characters you follow most closely. There's a lot of food for thought.

Maybe I was just having an off night because I recall the dilemma about who should end up with a child, the adopted mother or the biological mother who gave her up during a time of stress, as the most interesting thing about the book. I felt torn because I could see both sides of the legal argument and how each of the mothers might feel. But, we didn't really talk about that for long, other than to acknowledge that the book seemed to be a story of motherhood in which the author described a number of different mothers, their desire to have a child, how they reacted when they became pregnant or didn't, what it's like to be a person who gives up a child or who chooses to abort one. Little Fires Everywhere definitely offers a number of perspectives on motherhood.

Highly recommended - When I finished the book, I looked up reviews by friends at Goodreads and found that at least one of my friends felt the opposite to how I felt -- she hated the photography details and didn't find the characterization went deep enough. Huh. I really thought the characterization was amazing, myself. At any rate, Little Fires Everywhere was a 5-star read for me and I haven't read Celest Ng's first book, so I'm looking forward to eventually reading it.

Note on the cover: I've posted the cover of the book I purchased, which was bought from Book Depository and is similar to American paperback covers.

©2018 Nancy Horner. All rights reserved. If you are reading this post at a site other than Bookfoolery or its RSS feed, you are reading a stolen feed. Email bookfoolery@gmail.com for written permission to reproduce text or photos.
Posted by Bookfool at 7:32 AM