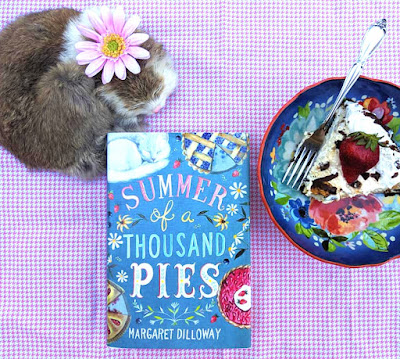 Since I screwed up and made my On Democracy post so lengthy, I'm going to double up and keep these two reviews short. Both are children's books and I presume they're for around the same age range but No Flying in the House may skew a bit younger.

Summer of a Thousand Pies by Margaret Dilloway is the story of 12-year-old Cady. Cady's father has been arrested and she has to stay with her Aunt Chelle while he's in jail. Chelle owns a pie ship that isn't doing well. She lives in a small, tourist town with several pie shops and she only sells two flavors. Cady wants to help salvage the pie shop. But, first Aunt Chelle insists that Cady must learn how to make the perfect pie and the best way to do that is with practice. She tells Cady that she must bake 1,000 pies. Cady sets to work and while she's practicing and learning, she experiments with different flavors. Cady thinks part of the reason Aunt Chelle's shop isn't doing all that well has to do with their limited offerings so she's determined to find some unique flavors and convince Aunt Chelle to sell them. When she's not at the pie shop she's getting to know the town and making friends. When things go terribly wrong and Cady's afraid she may return to being homeless, can she and her new friends come up with a plan to save the pie shop?

Recommended - I was unsure about Summer of a Thousand Pies, at first. Middle grade books don't always interest me as much as I hope they will and it seemed fairly bland, at first. But I'm glad I stuck it out. There are some timely themes including homelessness and how traumatizing it can be for a child and the broken immigration system. Cady also has the challenge of learning how to forgive the people in her life who have let her down. Aunt Chelle is LGBT but her partnership is presented in a very matter-of-fact way, not as a problematic element, which I liked. There are also recipes in the book — always a plus! 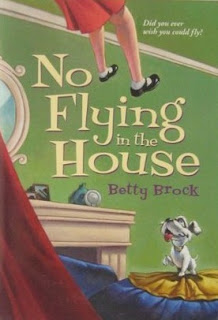 No Flying in the House by Betty Brock is an older title, originally published in 1970. I bought a copy of it when I saw a photo of one woman's favorite childhood books. I'm actually quite surprised that I've never heard of it because I would have been the right age for it a year or two after publication and books starring little girls with special abilities (or magical cats – both for obvious reasons) were among my favorites. But, nope, I'd never heard of it.

Annabel Tippens has a strange guardian, a 3" dog named Gloria. When Gloria shows up at a wealthy woman's home and asks to live with her, she doesn't admit to the fact that she's caretaker for a little girl until the woman says yes. When Annabel finds out she's half fairy, she makes a nuisance of herself by trying to learn how to fly. My favorite passage:

"If I were a fairy, I'd be able to fly, wouldn't I?" Annabel asked Miss Peach one day.
"In my opinion," said Miss Peach, "that's the best part of being a fairy."
"Would I need wings?"
"Not necessarily," said Miss Peach. "But wings would undoubtedly help."
After that, when no one was looking, Annabel practiced flying. She started by jumping off the terrace.

That cracked me up.

Recommended for little girls - I am absolutely certain I would have loved this book if I'd found it when I was in the right age range. Unfortunately, I found it a little too silly. Gettin' old. But, I'll find a happy new home for it.

I bought both of these books and will either donate them or pass them on to my granddaughters.