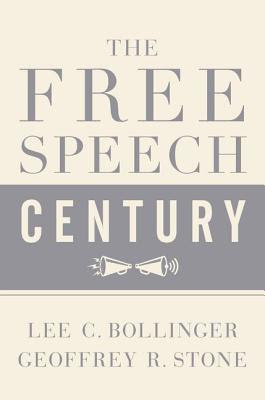 When sovereignty resides in the citizenry, then there can be no place for the State to tell the people what they can and cannot say or hear. The process of self-government must be insulated from the intrusion of official censorship, and it is the proper role of the judicial branch to provide that insulation.

~p. 6, from "Dialogue" in Advance Reader Copy of The Free Speech Century (some changes may have been made to the final print copy)

The Free Speech Century, edited by Lee C. Bollinger and Geoffrey R. Stone, is a book of writings on the topic of free speech published to commemorate the 100th anniversary of the first Supreme Court decision interpreting the speech clause of the First Amendment. The book opens with a dialogue between the two editors and then dives into the writings, which are divided into three parts:

The simplest way to look at those three sections is probably to say that the earlier writings lay the foundation for the modern interpretation of the First Amendment, while the second section goes into the disputes and problems with current interpretation, and the third section (the shortest) observes how the U.S.'s First Amendment has influenced the writing of constitutions in other democracies throughout the world and examines new and coming challenges, with focus on free speech on the internet and the responsibility of social media platforms.

Up front, I have to say that I have a limited understanding of law and had to look up a lot of legal terminology. The Free Speech Century's collection of writings, though, is varied enough that I found some of them breezy and straightforward, as a layman, while others were difficult to read. But, those that were more challenging were worth the effort involved in reading and parsing. And, much like reading something like a Georgette Heyer novel, the farther you get into the reading, the easier it is to understand as you become accustomed to the language.

Among the topics are the original purpose of the amendment (to allow citizens to keep the government in check), why the amendment was considered less important till WWI upon the decision in Schenck v. the United States (written by Oliver Wendell Holmes) that the book commemorates, the judges who made important decisions and how they changed how we view free speech, America's influence on the constitutions of other democracies, current problems with the First Amendment and challenges going forward.

I marked up the book so thoroughly with flags that I ended up intimidating myself with the sheer number of quotes I found flag-worthy. Flipping through all those quotes, though, has served as a reminder of the depth of free speech topics that are covered in The Free Speech Century. I found some topics more interesting than others, of course. One that I was particularly interested in was, "The Classic First Amendment Tradition under Stress: Freedom of Speech and the University" by Robert C. Post, about the concept of speech sanctioned by a university and whether or not state schools have the right to ban speakers. That was a topic I've wondered about, since some speakers (particularly those with radical right-wing views) have recently been banned from speaking on campuses, prompting some conservatives to claim that free speech is being throttled by the universities that have banned them.

The purpose of classic First Amendment principles is to protect the process of self-government. But speech within universities does not serve this purpose. It serves the purpose of education, which requires an entirely different framework of speech regulation and protection. Speech within campus is ordinarily protected according to principles of academic freedom, as distinct from freedom of speech. [...] The plain implication is that [students'] speech may be regulated in ways that facilitate their education. [...] No competent teacher would conduct a class on the premise that all ideas were equal.

"Keeping Secrets" by David A. Strauss is worth a read if you have a strong opinion about recent leakers of government information because it compares the Pentagon Papers to recent leaks and explains recent leaks, like that of Edward Snowden, in a way that has been glossed over by the press. Like the argument about free speech on university campuses, it's a topic I've wondered about.

Snowden leaked because he was concerned about government surveillance programs. But Snowden, unlike Ellsberg [leaker of the Pentagon Papers], was not deeply knowledgeable about the materials he was leaking. He had no particular background or training that would enable him to evaluate either whether the government was acting wrongly or how damaging the release of the information might be. He had access to all that information not because he was an expert but because he was an IT guy.

Highly recommended - While the reading can be challenging, at times, The Free Speech Century is an excellent book. I learned a great deal about such things as the meaning of "clear and present danger" in relation to free speech (words first used in the Schenck decision), how Canada is getting the problem of porn as free speech right but the U.S. allows for exploitation of women and children, why free speech rights have nothing to do with what kind of speech a business considers acceptable and can forbid on its platform or from its employees, why the ACLU "features prominently, if not centrally, in most histories of the modern First Amendment," when leaked government information has been punishable or not and why, and many other topics.

Notably, I just yesterday read an article by an artist who claimed that her right to free speech was being quashed by Facebook because her art — which contains controversial images in protest of their recent usage — has led to her being banned completely from Facebook and losing not just years' of posts but, more importantly, the list of followers that help her maintain an income. I already knew that how a business chooses to regulate speech is not covered by the First Amendment, as she suggests, but I definitely gained a deeper understanding of why that's true and the historical purpose of the amendment from The Free Speech Century.

Ugh, it's hard to shut up about this book. It was definitely a terrific learning experience. I won my Advance Reader Copy of The Free Speech Century from Oxford University Press via a Shelf Awareness Drawing and I feel privileged to have read it.


©2019 Nancy Horner. All rights reserved. If you are reading this post at a site other than Bookfoolery or its RSS feed, you are reading a stolen feed. Email bookfoolery@gmail.com for written permission to reproduce text or photos.
Posted by Bookfool at 2:33 PM