On Democracy by E. B. White, ed. by Martha White 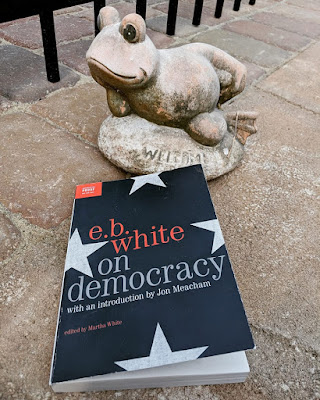 [...] It is not only treacherous to help the enemy by postponing questions which involve the lives of all of us but it is the greatest insult which can be offered to the electorate of a democracy. When you hear it announced that such-and-such an issue cannot be raised now because it is "political dynamite," the implication is that you yourself are mixed up in a cheap trick perpetrated by one section of the people on another section.

One of my all-time favorite pieces of writing in the world is by E. B. White, a tribute to Pullman cars (railroad sleeping cars) in a book of essays published some time in the 1940s. It's a lovely, moving, brilliant piece of writing. So, I figured White probably had some wise and wonderful things to say about democracy and jumped at the chance to read and review On Democracy, a book of his essays and a handful of rhyme-heavy poetry.

I was correct. There's plenty of wisdom in On Democracy. But, it is also an excellent showcase for White's wit and humor and a reminder that America has survived similar attempts to attack truth and the rule of law to what we're currently experiencing, although I confess that I didn't find the fact that such attacks eventually failed all that soothing because we now have so many huge issues to address. Among them: potential human extinction being ignored and/or suppressed by an entire administration, massive voter suppression, newly-created poll taxes, refusal to address a foreign attack on our voting system (machines that can be easily compromised and which contain no paper backup are being bought by states at an alarming rate), and a political party that talks big about transparency whilst going out of its way to hide absolutely everything that may or may not say something untoward has been done by them while declaring investigations (which they themselves recently drove into the ground with at least 7 investigations that proved absolutely nothing bad about the same exact issue) pointless and partisan. These are huge challenges.

With the fate of humanity on the line the stakes, it can be said, are much higher. Still, it's heartening to know that there have been times in the past when newspapers were being heavily bought out by a single purchaser who pushed his political slant on the reportage, corruption has run rampant, and executives in government have attempted to hide documents important to the public.

A few quotes from the book:

Save the world by respecting thy neighbor's rights under law and insisting that he respect yours (under the same law).


There's not much news to report. Roger and Evelyn had a baby girl a couple of weeks ago, and Roger is supporting it by working for a magazine called Holiday, a travel publication based on the perfectly sound idea that everybody in the United States would like to be somewhere else.


Misinformation, even when it is not deliberate, is at the bottom of much human misery.


Some of the published news was distorted, but distortion is inherent in partisan journalism, the same as it is in political rallies. I have yet to see a piece of writing, political or nonpolitical, that doesn't have a slant. All writing slants the way a writer leans, and no man is born perpendicular, although many men are born upright. The beauty of the American free press is that the slants and the twists and the distortions come from so many directions, and the special interests are so numerous, the reader must sift and sort and check and countercheck in order to find out what the score is.

[Editorial insert: In our modern world of brief sound bites, I'd be willing to hazard a guess that less than a quarter of the American population takes the time to "sift and sort and check and countercheck" as readers of the 1950s may have done, hence the creation of the term "echo chamber."]


The Herald Tribune headed the story, "PRESIDENT SAYS PRAYER IS PART OF DEMOCRACY." The implication in such a pronouncement, emanating from the seat of government, is that religious faith is a condition, or even a precondition, of the democratic life. This is just wrong. A President should pray whenever and wherever he feels like it (most Presidents have prayed hard and long, and some of them in desperation and in agony), but I don't think a President should advertise prayer. That is a different thing. Democracy, if I understand it at all, is a society in which the unbeliever feels undisturbed and at home. If there were only a half a dozen unbelievers in America, their well-being would be a test of our democracy, their tranquility would be its proof.


Highly recommended - While not exactly what I expected (heavier on the wit and humor than I anticipated), E. B. White was a brilliant writer whose thoughts on democracy were at once light-hearted and serious, penetrating and cogent. I was fascinated by the fact that White was hell-bent against the formation of what was then known as the "United Nations Organization" because he feared a world government would trample on the rights of individual nations to create and execute their own laws.

The essays/poetry span a significant time period, from 1928-1976, so there's a lot of ebb and flow from war to peace and back, through presidencies left and right, in and out of corruption, through arrests for speech we would now consider protected and threats to the press and university professors, and spanning other challenges to democracy. I recommend it to anyone interested in solid writing, politics, essays, history, and/or the topic of democracy in tumultuous times. Apparently, there have not been very many stretches without some form of upheaval. It does give one hope but also serves as a reminder that in order to maintain genuine hope, the requirement for action on the part of the populace is axiomatic.

©2019 Nancy Horner. All rights reserved. If you are reading this post at a site other than Bookfoolery or its RSS feed, you are reading a stolen feed. Email bookfoolery@gmail.com for written permission to reproduce text or photos.
Posted by Bookfool at 2:04 PM