A Song Below Water by Bethany C. Morrow 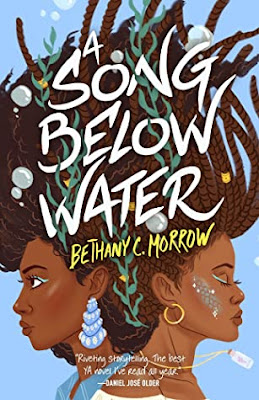 A Song Below Water by Bethany C. Morrow is the story of two high school juniors, Effie and Tavia, who are unrelated but living as sisters. Effie's mother used to play a mermaid in the Ren Festival and Effie plays a similar role. Each year, she is Euphemia and her courtship is a story that continues from one season to the next. Effie doesn't know who her father is but she wonders if she's a real-life mermaid. However, her grandparents, who put her with Tavia's family for her safety, won't answer her questions about her father.

Tavia is a siren who thinks if she tries hard enough she might be able to communicate with her deceased grandmother, after hearing that even a dead siren can speak through bodies of water. To avoid talking when she gets the urge to make one of her siren calls, Tavia has been faking a condition for years in which she seemingly loses her voice regularly. When she doesn't want to speak, she signs, instead. Effie uses sign language to communicate when she's playing a mermaid so she's able to translate for Tavia when she chooses to sign. Tavia worries about the fact that being a siren could put her and her family in danger. The public sentiment is that it's best to mute sirens. So, she has a secret support group where she lives in Portland and she keeps the fact that she's a siren quiet, otherwise.

There is a gargoyle living on the roof of the home where Effie and Tavia live, which Tavia believes to be there for her protection. But, nobody really knows. Meanwhile, strange things are happening with Effie. Occasionally, her skin peels off, revealing scales, her hair will do a weird floaty thing where it looks like it has a life of its own, there's a weird effect around her like she's looking through water, and recently people have been turning to stone when she's nearby. What is Effie? Is there any way she can find out whether she's a mermaid or a sprite or some other mythological creature? What can be done about the people turning to stone?

There's a lot more going on in A Song Below Water but it's best to actually read the book and find out all those details, although I'll share a few that I found interesting. Effie and Tavia are both black and Tavia is obsessed with the wildly popular Instagram account of a woman who does tutorials on how to style black hair, for example. What does that have to do with anything? Well, I can tell you from both the book and my experience as a person who has lived in a state with a high black population for decades that hair is very, very important to black women. At times, I've found myself envious of the elaborate things they can do with their hair. They style it like sculptures! Seriously, it's amazing.

There are also many references to being black and how that makes a person vulnerable. At one point, Tavia has a run-in with the police. She's doing nothing wrong and yet she somehow ends up with a warning. Why? Because she's black, nothing more, nothing less. Morrow does an excellent job of showing how difficult it is to live with the fact that being black can be a death sentence.

The author also touches on the cliquishness and popularity of certain people with the eloko characters. I had to look up elokos (they're from African mythology -- a kind of forest spirit that's a bit hairy-looking if you google it) and the way the author portrayed them was not at all like what I found on the Internet. Not that that mattered. The point was that in this world, elokos are the popular crowd. They make a delightful trilling sound and they have a melody that they can show off by blowing on the bell each individual wears around his or her neck. It's a detail but one that will undoubtedly resonate with young readers who've experienced being on the outside of the "in" crowd.

Recommended - I think I mentioned the fact that I had difficulty getting into A Song Below Water but once I became accustomed to the author's voice, I had no problem in my Monday Malarkey post. It's worth it to stick out the beginning, when the author is setting things up and parts of it are a little on the confusing side. Once I became accustomed to it, I found Tavia and Effie's world fascinating, unique, and a little weird ("Keep Portland Weird" is oft-repeated; it's clear she chose the setting very deliberately). I also loved the way many very timely subjects were treated. Could the idea that the public sentiment that it's best to mute sirens be a comment on how the white world tries to silence black female voices? I think so. There's quite a bit of depth to A Song Below Water. And, as a side note, the gargoyle was a surprisingly fun character.