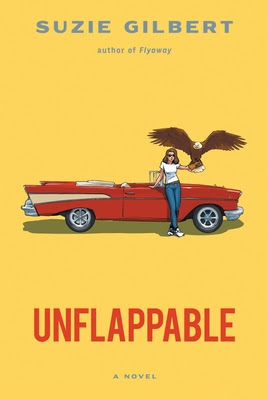 "I have just demonstrated one of the many advantages of being a big woman," she said, loosening her grip. "Would you like me to let you up?"
"No thanks. I like it down here."
"You're lying in a pool of wine."
"It's called marinating."

When author Suzie Gilbert sent out a promo email about her first novel, I remembered her name and her nonfiction book about bird rehabilitation, Flyaway (link leads to my review), even though it's been literally a decade since I read it. I loved Flyaway that much. So, I was very excited to find out the author has written a novel with a character who is a wildlife rehabilitator. I wrote back to tell Suzie how much I still remember loving Flyaway and wish her luck on her new release. She asked if I'd like a copy of the new book, Unflappable, and I enthusiastically replied that I would. So, full disclosure, the author sent me my copy of Unflappable. I almost never accept books directly from authors because I'm honest about books, no matter where they come from, and in my nearly 14 years of blogging, a few feelings have been hurt (not my intent, of course). But, I'll make an occasional exception.

In Unflappable, Luna is a bird rehabilitator who decides to leave her billionaire husband, who is really not a very nice man nor a person whose businesses have been good for the environment. In order to try to lure her back, he has a bald eagle named Mars stolen. Mars was snatched from a nest and raised by an individual (illegally, I presume) so he can't be released into the wild. Luna is fond of the eagle and even wears a silver bead with one of his feathers around her neck. When she steals back the eagle her husband has had stolen, Luna knows he has the money and connections to track her down. So, she goes on a road trip using her network of wildlife rehab friends as an underground railroad of sorts. She plans to take the eagle where nobody can interfere with him.

A socially awkward guy named Ned has been told he needs to do community service by the IT company he works for and he coincidentally shows up when Luna is in desperate need of help stealing an eagle and escaping. In his classic car, they head out of Florida. But, Ned's car is a little too obvious. He'll need to pass Luna off to someone else and head home so they can't be tracked. In a comedy of errors, Luna and Ned find themselves having to constantly update their plans while a friend who rehabs cougars and keeps armadillos in his house has fun scaring Adam, the billionaire, soon-too-be-ex.

Meanwhile, it's not just Adam that Luna and Ned must evade. A Fish and Wildlife agent, the police, and Adam's henchmen are all trying to track down Luna. Most of these people don't really care about the eagle (although the story serves to delineate people who are driven by strict legal guidelines versus those who only have the needs of the animals in mind) so the concept of the road trip to get the bird safely to Canada and then reunited with its bonded partner is maybe a bit far-fetched but that doesn't matter. The ending is ultimately satisfying and the fun is in the chase, capture, escape, chase rollercoaster ride. There's plenty of action for those who love a plot-driven book.

Highly recommended - What a ridiculously fun read: part road trip, part escape thriller, part romance with a theme about the importance of caring for all life, even the individual animal that's been hit by a car or knocked itself out on a window. I loved the author's sense of humor and I particularly liked the character Warren. You have to read the book to appreciate him; he's a fun character. There was only one thing I disliked about Unflappable, and it was mostly down to an editing problem. Occasionally, there would be a flashback but it was not separated from normal text by italics or some other method to show the change of timeline, although the clue was usually a lack of quotation marks in remembered dialogue. No matter how many times that device was used it always, always threw me and I'd find myself rereading to try to figure out what was going on. It was annoying but not a big deal.

There was also a huge cast and you had to keep getting to know new characters but, again, that was a shift that happened now and then because of the lengthy road trip and, ultimately, I grew to enjoy meeting the various rehabbers as they were introduced. So, while it presented a challenge to the memory (as when a character at the beginning is suddenly brought back and you struggle to sort through all those characters to remember him or her) it was not a big deal. And, it certainly gives the reader an interesting peek into the variety of wildlife rehabilitating specialties.


Fiona Friday will be moved to Saturday because I thought it was important to review Unflappable, ASAP. I meant to get to it in May. My apologies to the author for the delay and many thanks for the review copy!

©2020 Nancy Horner. All rights reserved. If you are reading this post at a site other than Bookfoolery or its RSS feed, you are reading a stolen feed. Email bookfoolery@gmail.com for written permission to reproduce text or photos.
Posted by Bookfool at 10:14 AM