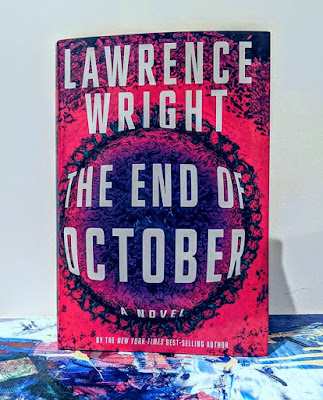 
Just the one arrival, this week. The End of October is a pandemic novel and I've been in the mood for more pandemic-type dystopia, partly out of curiosity for how such a thing is handled by various authors. I think I've mentioned that I'd love to reread Mike Chen's A Beginning At the End to see it from a different viewpoint, since I read it just before the pandemic reached us. There are things he got right that I would have never considered if I were writing a pandemic novel. Anyway, The End of October is getting a lot of buzz and I read that it's similar to what we're going through, so I decided to grab a copy. I also ordered a copy of the John Barry book a lot of people are buying about the Spanish Flu. I think it'll be here in a day or two. Otherwise, I've put myself back on a book-buying ban, for now.  Except, there are some Black Experience-type books like How to Be An Antiracist by Ibram X. Kendi that I might allow myself to buy soon because I'm white and trying to understand what my part is in stopping racism in America.


I can't say this was a bad reading week because I'm enjoying what I'm reading but ugh, it was not productive.


I'm typing this on Sunday, as I often do, and I don't know if I'll finish Unflappable or not, tonight; I'm about halfway through. I'm immensely enjoying both of these books. Wow, No Thank You sat on the nightstand for most of the week, unfortunately, for the same reason that I haven't finished Unflappable. It was just one of those weeks during which I would get sleepy and drift off while reading but then wake up as soon as I turned off the light and toss and turn and toss and turn and then wake up early so that I'd be sleepy at bedtime, again. Kind of a vicious cycle type of thing.

But, I am also loving Unflappable, a novel about a bird rehabber who decides to leave her billionaire husband. To try to lure her back, he has his people steal a bald eagle that she's fond of and then she steals it back and goes on a road trip, using her network of wildlife rehab friends as an underground railroad of sorts, to take the eagle where both her wealthy husband and authorities can't interfere with him. It's absolutely delightful. She's being driven in classic cars by an IT nerd who just happened to show up to do volunteer work as she was in need of help escaping from the wide reach of her husband, the kind of guy who can buy information and easily track a person down.

My Post War Abstract Expressionism lesson of the week (taken via Coursera) was on Willem de Kooning. I think my personal attempt at imitating de Kooning is pretty laughable. It was supposed to be done in oil because that's what de Kooning used and you can't really get the same effects from acrylic. But, while I have some oil paint from years back, I don't have things like turpentine and brush cleaner and other basic supplies. So, I tried to imitate using acrylics. The result was pretty bad, but I do think I learned a few things and maybe kind of get what's special about de Kooning, now, so that's cool. 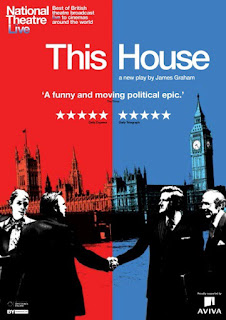 This week's free streaming production from Britain's National Theatre was This House. It's still available through Wednesday, I believe, and I highly recommend it if you like a very classically British play about politics. It takes place in the 1970s. The Labour party has just come into power with a margin so small that they can't really accomplish anything, so they're trying to figure out how to gain more power as the play opens. Meanwhile, the Tories are plotting how to weaken them.

The quote on that image, at left, is accurate. It's both funny and moving. If you're American, you'll see the differences and similarities between our political systems. There were a few things I didn't understand. I still need to look up "pairing" to see what that's all about, for example. But, I understood most of it and we thought it was a terrific production with some great actors. The man on the right, shaking hands on the blue/Tory side, was in Downton Abbey and I recognized a few other actors but I'm not sure where I've seen them.

I also finished watching Upload (loved it!) and we watched a single episode of Life on Mars, which unfortunately becomes rather repetitive, after a time. Is Sam in a coma or not? Is he imagining the sound of voices he knows or are they real?

I also discovered Sam Neill's hilarious Instagram account. Check it out if you're on IG and haven't already found him.


©2020 Nancy Horner. All rights reserved. If you are reading this post at a site other than Bookfoolery or its RSS feed, you are reading a stolen feed. Email bookfoolery@gmail.com for written permission to reproduce text or photos.
Posted by Bookfool at 7:00 AM