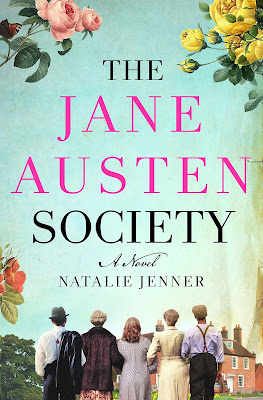 The Jane Austen Society takes place in Chawton, England, Jane Austen's final home. The great estate inherited by Jane Austen's brother, Edward Knight, is a shadow of its former self, the tenant income having dwindled. There are two remaining relatives. One is dying; the other is agoraphobic and unmarried. There will be no more Knights to carry on the legacy. The Austen-related memorabilia at a separate estate has already been auctioned off and a Sotheby's employee is eager to get his hands on more.

During and a little after WWII, we get to know a few Jane Austen-obsessed people who live in the village of Chawton (and one American actress) in The Jane Austen Society. Each of the main characters has developed a love of Austen's writing, mostly due to the influence of a friend or relative. When they realize they have Jane Austen in common (and not merely because of the nearby estate that her brother inherited), they come up with a plan to create a society for the sake of preserving a little of the history remaining in Chawton. Will they succeed? Or will a spiteful, dying man ruin the legacy and send the last Knight relative out to fend for herself?

There's much more to The Jane Austen Society than the attempt to preserve the house. They don't even actually become a society till nearly halfway through the book. In the first 125 pages or so, you get to know the individuals and the trauma they've each had to endure: a housemaid at the Knight estate, a teacher, a doctor, a farmhand, and an actress. Each has found escape and solace in the worlds created by Austen; each has favorite novels and passages.

The Jane Austen Society is a very character-driven novel. While I'm not normally big on character-driven novels unless a lot happens and it does take a long time before the storyline really cranks up, after all of the characters have been very thoroughly introduced, I really enjoyed every minute of the reading and loved the denouement.

Recommended - Slow of character development, by the time The Jane Austen Society really gets going, you're completely invested in the lives of the characters, their potential to fall in love, and their possible upcoming battle with a distant heir. I would especially highly recommend The Jane Austen Society to devoted fans of her work. I haven't read all 6 of her novels, just 4 of them. I loved all of the novels I finished. One that I attempted to read fell flat for me and I'm hoping to read the last one, Northanger Abbey, soon. So, there were times that two of the characters would be conversing about various scenes and I either didn't recall them in such detail or hadn't read them, yet, but the characters mostly stuck to discussion about Emma, Persuasion, and Pride and Prejudice, with an occasional dash into Mansfield House (the one I abandoned) so I followed most of it just fine.

My thanks to St. Martin's Press and Laurel Ann for the review copy!


©2020 Nancy Horner. All rights reserved. If you are reading this post at a site other than Bookfoolery or its RSS feed, you are reading a stolen feed. Email bookfoolery@gmail.com for written permission to reproduce text or photos.
Posted by Bookfool at 7:02 AM