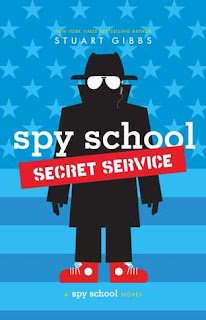 I don't know the order of the Spy School books by Stuart Gibbs but Spy School Secret Service is my 4th read and maybe the 5th or 6th book? Each of the books refers back to the others, on occasion, but I've found that skipping a title here or there is no big deal.
In Spy School Secret Service, 13-year-old Ben Ripley is sent on an undercover mission to the White House. Chatter about a possible attempt on the president's life has been overheard and even the Secret Service is suspect. SPYDER, the evil spy agency whose plans Ben has thwarted in the past, is involved and they are very good at infiltrating government agencies.
Ben's cover doesn't work out well, at first, so he has to be careful and clever to find a way to uncover the plot. But, when an actual attempt is made on the president's life, Ben is accused of the crime. Will Ben be able to find a way to stop SPYDER and get himself out of trouble?
Highly recommended - I absolutely love this series. Every book is equally funny and there are always plenty of exciting action scenes. I think I only have one Spy School book left on my TBR pile and I'm going to read it soon. This is a series I'll hang onto to reread. They're so entertaining that it doesn't matter one bit what age range they're meant for. They're absolutely delightful. 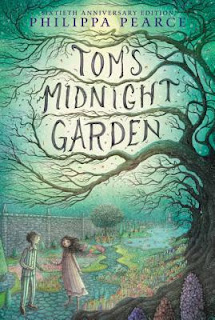 Tom's Midnight Garden by Philippa Pearce is a British children's classic (you can probably see that it says "Sixtieth Anniversary Edition" on the cover, although it's a bit small). I'd never heard of it till I read a review of it but I immediately put it on my wish list and it's one that I bought during my break from what seems to be becoming my permanent book-buying ban.

Tom's brother has the measles and to try to prevent Tom from getting them as well, he's hustled off to his childless aunt and uncle's home, a flat in a large house that's been divided. Tom is disappointed because he was looking forward to spending the school holidays playing in the garden with his brother. But, when the grandfather clock downstairs strikes 13, Tom is curious and he can't sleep, anyway, so he goes to peer out the back door, where he's been told there's a small parking area and a garbage bin but little else.

When Tom opens the door, instead he finds a large walled garden with plenty of room to explore and trees to climb. He finds that he's invisible to most of the people in the garden but there's a little girl who can see and speak to him. She thinks he's a ghost but that doesn't faze her; they become playmates. Each night, Tom sneaks out the door to the garden and plays in another time. Where and when does this garden exist? Is Tom's playmate the ghost of someone who used to live in the house?

Highly recommended - I can see why this book is a classic. It's beautifully written, mysterious, and absolutely sweeps you away to a magical time when nature was an endless playground. I loved every minute and was happy that the book ended exactly as I hoped it would.

I also found it quite interesting how a child's dangerous illness was handled in an earlier time (guessing his aunt and uncle had already had the illness?). Tom's Midnight Garden was published in 1958, undoubtedly pre-vaccine. His brother is ill for weeks, which fits my own experience as my vaccination didn't "take" and I was one of the rare children of my era who had the measles after being vaccinated.

Another book I'll hang onto for a potential reread and hopefully one that I can share with my grandchildren, someday.