A Boy Named Isamu by James Yang and Unspeakable: The Tulsa Race Massacre by Carole Boston Weatherford and Floyd Cooper

Both of the following are children's picture books. Full disclosure: James Yang, author of A Boy Named Isamu, is a high school friend. While these are both 5-star reads, I have very little to say about either, so this will be just a couple of slap-dash, quickie reviews. 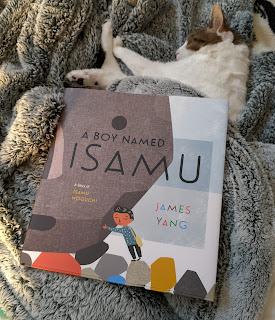 A Boy Named Isamu by James Yang is a story that imagines artist Isamu Noguchi as a boy, on a single day when he goes to the market with his mother and drifts away. It shows his boundless curiosity and sense of wonder as he notices the shapes and textures that will inform his art.

The illustrations are fabulous. I'm a fan of James's art but I think he really knocked it out of the park in A Boy Named Isamu. And, I loved the way he portrayed how an artist sees and thinks. There's a nice bio of Isamu Noguchi in the back of the book.

Highly recommended - I loved A Boy Named Isamu so much that I read it, recorded it in my reading calendar, and then read it again. As I said elsewhere . . . forget the grandkids, this one's for me. But, I'm sure the grandchildren would appreciate it, as well. 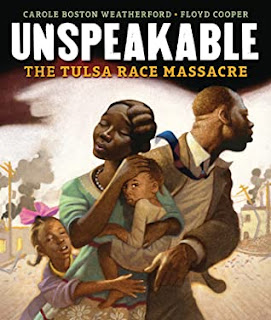 Unspeakable: The Tulsa Race Massacre by Carole Boston Weatherford and Floyd Cooper (illustrator) is a book I bought after seeing it on a list of books that some politician or conservative group wants banned. I was curious why on earth anyone would want to ban a children's picture book, especially about such an important topic.

Brief note: My husband and I grew up in Oklahoma and neither of us ever heard of this particular historical event, although Hubby says his friend told a story of his grandfather hiding a Black man in the 1920s and he's pretty sure it was during what has elsewhere been called the "Tulsa Race Riot" (a name which, this author notes, places blame on the victims).

Unspeakable tells the true story of the Tulsa Race Massacre  and places the blame squarely where it belongs, on the people of that time period who murdered, looted, and burned a prosperous black community to the ground. It's well written, appears well researched, and the illustrations are marvelous. It ends with a photo of the burned remains of Tulsa's Greenwood district. As an Oklahoman who didn't hear about this violent travesty until a few years ago, I'm glad to see it talked about.

Highly recommended - The hardback was sold out everywhere when I looked this book up, so I bought the e-book and the electronic version is perfect. There were no issues at all with the images. This story was suppressed for far too long and I can't imagine why anyone would desire to ban it other than a continued desire to suppress the truth. It's told in a very positive way and the illustrations are just stunning.