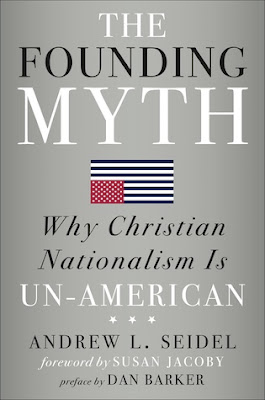 Jefferson also authored the Virginia Statue for Religious Freedom, upon which the First Amendment would be based. That law, along with the University of Virginia and the Declaration of Independence, were the only achievements he wanted inscribed on his gravestone. The statute guaranteed religious freedom by guaranteeing a secular government. In the statute, Jefferson skewered "the impious presumption of legislators and rulers, civil as well as ecclesiastical, who being themselves but fallible and uninspired men, have assumed dominion over the faith of others, setting up their own opinions and modes of thinking as the only true and infallible, and as such endeavoring to impose them on others."

The Founding Myth: Why Christian Nationalism is Un-American by Andrew L. Seidel is about the separation of church and state, how and why the "founding fathers" of the United States chose to create this wall of separation, and what specifically they said about religion that indicated their personal beliefs.

If you're a Christian, as I am, you'll struggle with certain opinions of the atheist author of The Founding Myth. He can be pretty strident when describing the negatives of religion. But, while he may get certain details wrong from our perspective, the bottom line is that the historical references and quotes lay out his assertion that the US was not founded as a Christian nation in a logical, detailed way.

Seidel also asserts that the wall of separation between church and state makes both religious groups and the government stronger. I agree with him on that, but if the idea rubs you the wrong way, all the more reason to explore why he makes such a declaration.

Highly recommended - I have always been a strong believer in the separation of church and state and the author of The Founding Myth does an excellent job of explaining why it exists and backing that up with historical references. As to his thoughts about Christianity, while there were some minor issues with some of his assertions about it, I like having my beliefs challenged and I can't deny that he makes a lot of excellent points about how Christianity has been used as a cudgel, whether to cause the submission of women or justify violence against enemies. Christianity has a terrible, bloody history, when you get right down to it. We see, in fact, the justification of gun ownership and use by Christians using a single, out-of-context Bible quote, even today.

There are a lot more quotes I considered using for this review as this is my most marked-up book, so far in 2022. But, the book is so worth reading that I'd rather just encourage everyone to read it, instead.