Blowing My Cover: My Life as a CIA Spy by Lindsay Moran 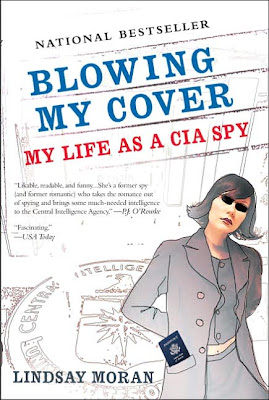 "You can always identify an Agency officer," one of my first bosses said. "He's the one working a cocktail party while the State Department weenies cower in the corner."

. . . my own prospects for ever tying the knot, I felt, were diminishing daily. None of the men I worked with seemed even remotely interesting. Contrary to the image perpetuated by movies like Spy Game and The Recruit, in which the neophyte CIA officer is played by some breathtaking hottie like Brad Pitt or Colin Farrell - a protagonist who's as introspective as he is hunky and who ultimately recognizes and confronts the moral dilemma presented by his job - most Agency men are self-consciously slick and preternaturally shallow. The male trainees spent hours on coffee breaks debating how best to achieve their next promotions.

Later, Mark and I tromped not so stealthily through the woods - he smoking one of his contraband cigarettes and me lumbering awkwardly under the jumbled load of equipment. Our faces painted for battle, we sported the night-vision goggles, whose effect was more disorienting than enabling, causing us to plunge into small ditches and run head-on into large trees.

I felt distraught and guilty every time I wrote back to headquarters: "Subject is motivated by the desire to help his ailing daughter. If recruited, we can effectively control Subject by leveraging medical aid for the girl."

Ophelia and I would get together for dinner and commiserate about how disgusting we found the process. Ethan, on the other hand, was into it, as were the majority of our fellow trainees. On our bike rides, Ethan would reassure me that Vainglorians were an oppressed and troubled people, in need of the CIA's help, and also that I ought not to feel sorry for any of the Malevolencians, whom we know - from the material contained in the binders - to be a bellicose and deceitful lot.

I started to read Blowing My Cover yesterday afternoon and ended up staying up late to finish (my version of partying till dawn, according to the husband). I'm still not certain whether I just wanted to gobble up a book or I enjoyed it so much that I couldn't put it down. I've got the house to myself, this weekend (and heavy rain meant migraine weather) so I'm leaning more toward the thought that I just felt like indulging because I didn't feel up to much else. It's certainly true that I found the author tended to concentrate on the negative aspects of becoming a CIA agent.

However, I did enjoy reading about Lindsay Moran's experiences, whiny tone and all. She begins the book by describing her childhood desire to become a "spy", her love of James Bond movies and spy novels and how she scoped out the neighbors' activities. I thought the opening was kind of funny because I did the same thing. I kept a little notebook full of information about how long the neighbors left their sprinklers running and who accidentally set fire to his mattress (a visit from the fire department was always a huge event in our neighborhood, so you really couldn't call it spying). As it turned out, my neighbors were unspeakably dull - which, I believe as an adult, is a very good thing - and it didn't last long.

Moran's interest never waned, although she filled out an application to work for the CIA at the age of 21 and then changed her mind. Five years later, she once again reversed her decision and went through with the process. Those five years were filled with rock climbing in Bulgaria, partying with friends, falling in love with a Bulgarian rock climber, work and grad school. She talks about her concern that she would be rejected for having smoked marijuana and the experience of having to go through drug and polygraph tests, followed by an interview with a psychiatrist who made her feel like a pervert. Honestly? She sounded a little nutty to me, by that point. Her life was interesting and sometimes enviable but not in a way that I would have ever emulated deliberately.

The bulk of the book describes her training, which is closer to the Colin Farrell movie version than I would have expected, sometimes to the point of terrifying her and her fellow trainees to tears. It's surprising that the CIA approved the book, given the depth of detail. But, her memory isn't faultless and she didn't always check her facts well, as evidenced by this quote:

"Wow." Chris seemed genuinely impressed. He'd never traveled any farther than Jackson, where he went to college at Ole Miss. When I told him I'd gone to Harvard and lived for a while in Bulgaria, a place he'd never heard of (and evidently equated with the land where no children are allowed, from the old Dick Van Dyke movie-musical Chitty Chitty Bang Bang), he was bowled over.

Oopsy. Ole Miss is in Oxford, not Jackson. One would expect a Harvard grad to check her facts a little better. In fact, to believe every word in this book would, I think, mislead the reader in many ways. Moran has a tendency to portray most everyone as moronic in some way, perpetuating the common belief that nobody of intelligence would continue to work for any branch of American government beyond five years. And, yet, Moran always describes herself as the brilliant, athletic Ivy-league grad with a heart. Take for example the following comments:

I was at once dismayed to realize that an evening service was taking place. This was poor planning on the part of C/O Abington, the kind of move that would have garnered someone a slew of lesters at The Farm.

Here, she's criticizing the agent she was supposed to meet with on Christmas Eve in Austria for not realizing there might be ordinary citizens inside the church location of their intended exchange of documents. Just two pages later, she says:

If anyone asked, I was working on a book called "The Women's Guide to Traveling Alone Around the World." Why and how I managed to commence my tour in Vienna, Austria, with a hitherto totally unadulterated passport, I hoped wouldn't come up.

You can't help but think, "Wait a minute. Neither of you had the common sense to figure out that people would be attending Christmas Eve services and you criticize the agent who set up the rendezvous; but, it's perfectly fine for you to not bother coming up with a complete story that explains your presence in Vienna?" I think maybe the author was unaware of her own lack of common sense. Nights spent sneaking out to drink and meet with boyfriends using government vehicles add to the picture of a not-so-dedicated trainee who happily took advantage of time spent learning and partying at taxpayers' expense. She doesn't leave herself a whole lot of room to criticize.

Still, the book provides an interesting peek into a type of training and lifestyle that has been so closely guarded it's not surprising we have a warped image. The gist of the book is that training is brutal and the job itself a lonely and uncomfortable experience. There's no sneaking around to steal papers, scaling walls and unlocking tricky devices while guards lurk about, ready to chase a spy and rain gunfire around them. Instead, there is a great deal of paperwork and time spent coercing people - in her case, in a nation where roughly half of the population hated Americans.

Just an aside: after my 4th-of-July caption, I really appreciated this comment:

Explosives, a topic that enthralled the men in our class, did not interest me in the least.

See, I told you it's a guy thing. Apart from the fact that Blowing My Cover is a bit jumpy (sometimes I had to flip back to reorient myself as she often bounced back and forth in time) and the author has a tendency to focus on the negative when not describing herself or those close to her, the book is very readable and I still recommend it for the unique look at the machinations of a much-glorified profession.

Thanks to rain, the camera has been sitting idle. So, here's the best of hubby's sign photos from Australia: 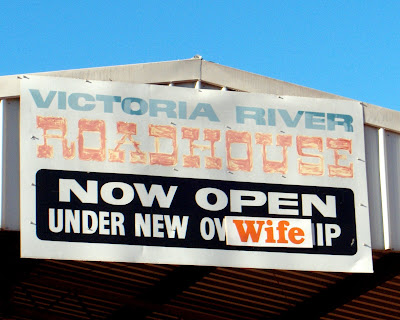