Ticket to Tomorrow by Carol Cox 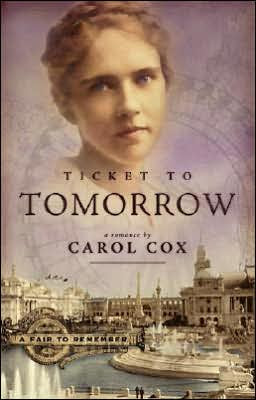 I won my copy of Ticket to Tomorrow in one of the drawings Katrina at Callapidder Days held during her Spring Reading Thing. I figured the timing was right because I was in need of a little inspiration, this week, and I love traveling in time via historical fiction. As it turned out, I was correct. The book isn't preachy about Christianity, but the occasional scripture read by the heroine tended to be inspiring and hopeful.

Ticket to Tomorrow is set mostly on the grounds of the Chicago World's Fair in 1893, and tells the story of Annie Trenton. Widowed just over a year before the story takes place, Annie has continued her late husband Will's work with partner Silas Crockett on the Trenton-Crockett horseless carriage. As the book opens, Silas and Annie are in the process of traveling from Indiana to Chicago to display their exciting new invention. Silas is a scatterbrained genius and Annie happily watches out for him, making certain he doesn't leave his possessions behind or lose his way.

*****Warning: The following three paragraphs may contain some spoilers. Skip this section if you plan to read Ticket to Tomorrow, right away*****

During their visit to Chicago, Annie hopes that she will find the opportunity to mend the rift between her late husband and his parents. But, when she attempts to reconcile with Will's family, she's met with hostility and, later, their interest in her husband's invention prompts the wealthy Trenton family to attempt to take over Will's share.

In addition to her trouble with Will's family, Annie finds herself drawn to Silas's nephew, Nick Rutherford, a performer with Buffalo Bill Cody's Wild West Show. Plus, Annie and Silas have stepped into the midst of a political intrigue and Annie's life may be in danger.

That last little bit of plotting didn't come off quite as well as I'd hoped. At the root of the political intrigue is a potential assassination and the danger to Annie and Silas is based entirely on the accidental transfer of property when Silas bumps into a man and their possessions go flying. Somehow, each man ends up with the other's valise. What didn't make sense to me was the description of two men gathering their possessions in an early scene, followed by one man's insistence that his case was firmly latched and the only way Silas or Annie could have ended up with certain critical documents was for them to root through the man's luggage. Both Silas and Annie did so, but I kept mentally returning to the scene, wondering why the author had possessions scatter if a simple transfer of luggage would have solved the purpose without adding confusion.

Regardless of that one little plot hitch, Ticket to Tomorrow was a fun read - not brilliantly written and, I thought, a bit transparent and predictable. But, there are times a gentle, romantic book with a touch of mystery and a solid historical setting can be very pleasing. I enjoyed the peek into the World's Fair, the descriptions of the so-called "White City" and it's wide variety of exhibits, as well as description of the scenes portrayed in the Wild West show. And I found it quite easy to picture Annie and the other characters. There was some annoying repetition, but overall the book was a welcome, uplifting diversion, definitely G-rated, and a fun way to visit Chicago in the late 19th century.

Strange things are afoot at the Circle K - or, at least, in Bloggerland. The "shrink to fit" feature is suddenly not working on photos added to my sidebar. Anyone else having this trouble? I was all set to change out my photographs, but after adding two book covers (which, then, stretched like Silly Putty) and one photograph (she's really not a chubby girl, that person running away from the camera), I opted to stop and wait until the problem is mended. I wasn't able to find a contact email for Blogger, but I've found that most of these little glitches usually disappear, at some point. Patience is a virtue required of Blogspot users.

I'm working on a very last-minute bit of writing for Estella's Revenge, so I'll keep this short. Hopefully, my normal, chattery posts will resume soon. I can't thank all of you enough for the notes, thoughts and prayers after the death of our Sunshine, last week.
Posted by Bookfool at 1:25 PM