Rumor Has It by Jill Mansell 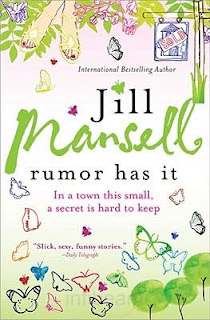 Tilly Cole's live-in boyfriend has just moved out without a word of warning, but Tilly knows the real reason. She has let the relationship die. To get her mind off her return to being a single woman, she goes for a visit with her best friend, Erin, who lives in a small English village in the Cotswolds and lives over her own shop. Erin used to think she'd leave Roxborough, but now she knows better. It's lovely living in a town where everyone knows everyone, even if sometimes it can be annoying.

While in town, Tilly has a good time, but she's anxious to get back to London. That is, until she sees an advertisement for a "girl Friday". Suddenly, the idea of staying somewhere different is appealing -- especially after she gets a glimpse of the irresistible Jack Lucas, an almost-widower (his bride having died in a terrible accident just prior to the wedding) with a terrible reputation but a charmer, nonetheless. Maybe there's something for Tilly in this tiny village. It's worth a try, after all.

Tilly finds herself blown into the whirlwind of her new boss's life and enjoys it immensely, but there's something very odd going on whenever she's around Jack. Is he interested in her? And, could it be that she's just the slightest bit attracted to him? Of course not. If there's one thing Tilly knows, it's that she is not going to become a notch on the bedpost of a man known to have slept with everyone in the village. But, there is something utterly charming about him and he's hiding a secret Tilly must uncover. While she keeps Jack at a distance, they become fast friends. But, someday, she is going to find out the truth. And, what will happen then?

I totally adore Jill Mansell's playful, romantic books. I got an ARC of Rumor Has It from Sourcebooks, but I own the vast majority of Mansell's books written before about 2005 and the truth is that I'll always, always read whatever she writes -- she's one of my all-time favorite writers. It's just rather nice that I no longer have to pay overseas postage. Like her other books, Rumor Has It is blessed with lovely characters, interesting twists, several relationship stories going on at once. There's always a lot happening in a book by Jill Mansell.

You could classify Jill Mansell's books as "chick lit" but I honestly think that would be rather rude. They're romantic and funny but not brainless fluff, so I like to think of them as "romantic comedy" but they're mostly fun, light relationship stories. They take place in the U.K. because Jill Mansell is from Great Britain, so if you're a hopeless Anglophile, there's an excellent excuse to read her books.

- Extremely entertaining, lively and romantic fun with a few serious undercurrents (Jack's loss, Tilly's inability to let anyone stay close, a terrible town busybody and a couple sneaking around because his wife exhausted him and then he just happened to fall in love with her, etc.) . The characters are realistic if a bit more light-hearted and lovable than most.

I think of all of the Jill Mansell books I've read, only one didn't thrill me. And, I still enjoyed it; I just wouldn't have given it a perfect score. Bear in mind that I'm a gushy fan and tend to rate her books very high because they totally sweep me away and always, always make me smile.

Pardon the onslaught of reviews. I'm trying to punch a good hole in that nasty list of unreviewed reads. Catching up is going well, today. I'm happy. Hope you're happy, too!