It seems like I've abandoned more books than usual, recently, but at the moment I can only find two. One I will return to and one I will not. Here's why I didn't finish them, and whether or not I'll give them a second go: 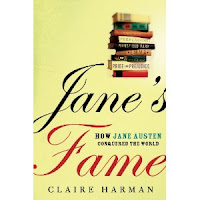 Jane's Fame by Claire Harman
There is absolutely nothing wrong with Jane's Fame. Don't let the fact that I've set it aside twice fool you. The first time, I simply had too many books going at once. The second time was one of those phases when non-fiction was just not grabbing me, although even then I enjoyed what I read. In fact, I totally dumped everything I was reading and started over on a new batch, at some point. So, Jane's Fame was simply a victim of an attention-deficit summer. I will definitely continue to read Jane's Fame, when I get over my summer slump . . . which seems to be lingering.

The Outer Banks House by Diann Ducharme
I got an ARC of The Outer Banks House from Shelf Awareness, based on the description and that gorgeous cover. I'll admit, the cover really grabbed me. Read this excellent review at Fiction Addiction for a full description of the story. To be honest, there's little that I remember apart from how I felt as I read. My general feeling, as I was reading the book, was that the story was too contrived. It didn't work for me; it didn't flow and the book never succeeded in capturing my interest. After two attempts, the book went into a roving book box being passed around by friends and I will not give this book another try.
Just walked in:

Beneath the Thirteen Moons by Kathryne Kennedy - An ARC from Sourcebooks to be released in December, 2010. I really like the cover at left, but that's a cover from a previous edition. The new Sourcebooks cover has a slightly mystical look at the bottom and a man with his shirt open on top. Have I ever told you what I think of bare-chested-man covers? About the same thing I think of scantily-dressed female covers. I think they're self-limiting, meaning some people will look at them and assume "romance" then refuse to touch them. Romance is actually the top-selling genre, so it's probably a good move for Sourcebooks to go with the bare-chested look, but it's one I tend to dislike. Fantasy is not as big a seller, but I do love a beautiful fantasy-related cover and that's why I thought I'd share the old cover.

Part of the cover description:

She's an outcast, but at least she has her independence . . . Mahri Zin would stop at nothing to save her village, and when they needed a healer she didn't think twice about kidnapping one. But when she realizes that the healer she so impulsively stole is none other than the crown prince of the Sea Forest, Mahri knows that she has a chance to change the fate of her people.

Whisper on the Wind by Maureen Lang

Whisper on the Wind

follows the story of Isabelle Lassone, a Belgian-American socialite whose parents whisked her away to safety at the start of the war. Yet at great personal risk, Isa sneaks back into the country to rescue those dearest to her, Edward and his mother. But Edward refuses to go, and soon Isa is drawn into his secret life working on the newspaper -- and into his heart.

Again, that's just a portion of the publisher's blurb. I requested Whisper on the Wind for a blog tour because I read Lang's My Sister Dilly in 2008 and thought Maureen Lang's writing was excellent. I've kept her name in the back of my head but hadn't managed to acquire any more of her books, so I jumped at the chance to review another. My Sister Dilly was contemporary, so it will be fun to see how the author handles historical fiction.

Gosh, there's not much of that to be had. It is still way too quiet, around here. I'm trying to motivate myself to clean like crazy but it might take me some time to get into a new routine that doesn't revolve around Kiddo. The best news is that I hear from him regularly. Although he plans to come home on weekends, he's already reconsidering because he doesn't yet have a roommate and that means his dorm is a quiet place where he can study and get plenty of sleep -- better sleep than he's ever managed with an insomniac mother padding around at all hours. He's happy, so far, and that's nice to know.

In case you missed my last post, I'm giving myself 2-4 weeks to catch up, get used to the empty house and ponder what to do with myself. I have a lot of reviews to catch up on and I've found that I write best in spurts, so don't be surprised if one day I write three reviews and then you hear nothing for a week or two. Be patient with me. I've been a stay-at-home wife and mom for over 25 years. This empty nest business is a bit of a shock!

Bookfool, a little wacky but eventually she'll figure it out

©2010 Nancy Horner. All rights reserved. If you are not reading this post at Bookfoolery and Babble, you are reading a stolen feed. Email bookfoolery@gmail.com for written permission to reproduce text or photos.
Posted by Bookfool at 1:04 PM