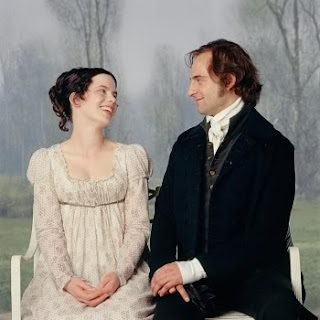 Another late review. I believe I read Emma in June. Never fear, Emma has totally stuck with me like that gunky stuff used to paste credit cards to card stock.

Emma Woodhouse is of marriageable age, living with her hypochondriac father at their lovely estate, where they regularly entertain. She's perfectly content with her life, as is, and does not intend to marry. However, her former companion has recently wed and Emma needs a new friend.

Convinced that she is responsible for the successful matchmaking that led to Mrs. Weston's joyous marriage, Emma befriends young Harriet and sets her sights on pairing Harriet with Mr. Elton, the local vicar. Meanwhile, Mrs. Weston's son-in-law, Frank Churchill keeps everyone on tenterhooks as the entire village awaits his much-anticipated visit. Frank was adopted by a wealthy couple when the first Mrs. Weston died and hasn't been seen by villagers for many years. When Frank finally arrives, Emma thinks he might possibly be the man for her.

Mr. Knightley is another regular visitor, a gentleman farmer whose estate is not far from Emma's home and a member of Emma's social circle, the brother to Emma's sister Isabella's husband. Isabella and her husband live in London and don't show up often, but there's always a great deal of joy when they do. At one point, Mr. Knightley made this reader cringe a tiny bit by commenting that Emma looked "well" holding Isabella's baby and recalled holding her when she was the same age. I got over it, though. Mr. Knightley and Emma have an interesting relationship. He likes to point out her flaws and she teases him in return. He is much more intuitive about matchmaking than Emma and tries to stop her from causing trouble but it's only later that Emma realizes he was right all along about pretty much everything. 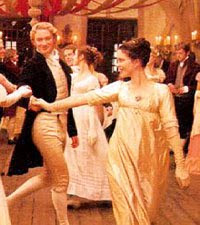 There's much more to the story, of course -- always plenty of coupling, dancing, celebration, socializing and a few little shocking surprises. The key question is, of course, will Emma mistakenly end up with Frank or realize Mr. Knightley is the man for her? How many times can Emma screw with poor Harriet's mind before Harriet figures out she must go with her heart? And, how on earth can Emma ever marry if it means leaving her stressed-out father on his own?

What I loved about Emma:

Well, everything. You know I'm an Austen fan. But, Emma is definitely special. Emma Woodhouse has just recently become my new favorite Austen character. She is guileless, cheerful and optimistic, means well (even if she does end up causing a bit of heartache) and is truly distraught when she realizes she's caused anyone pain. Emma is an extremely lovable character.

What I disliked about Emma:

Only one thing . . . it had a slow start. But, I've found that's not unusual with Austen. I had a little trouble warming up to Anne and getting into her story when I read Persuasion.

I'd already planned to watch the A & E version of Emma (a TV movie released in 1996), starring Kate Beckinsale, when I signed up for the Everything Austen II challenge. I ended up watching part of it on a plane and finishing up at home. Or, maybe it was the other way around. Anyway, I thought A & E's adaptation was fabulous, if a bit "Emma in hyperdrive" because there really is a great deal to the story, with its large cast and all the little twists. To compress that story into a mere two hours is quite a feat. The crucial parts of Emma are all there and I thought the movie was beautifully scripted, the settings were lovely and fitting and the actors almost perfectly cast. I can't say the actress who played Harriet fit my mental image, but everyone else at least came close. Since I own a copy of the A & E Emma, I'll undoubtedly watch it many, many more times.

For a more detailed review of the movie, check out this post at Ribbons of Light.

And, now another round of Emma:

I'm currently reading Emma and the Vampires, which is credited to both Jane Austen and Wayne Josephson. It's another one of those crazy mixes of classic and paranormal, in which pretty much half of the Highbury residents are vampires. Some are vegan and some are not, which is a bit confusing because it means there are gentlemen and lady vampires who wouldn't think to chomp down on an innocent neck, yet there's a whole other set preying on young women.

I opted to read this book because I've been hoping I'd find a nice tongue-in-cheek Austen parody that would provide a few laughs. Mr. Darcy, Vampyre was a total let-down because the author took her subject seriously rather than simply using Austen's Pride & Prejudice as a framework and playing with it in a fun way. Josephson has his writing flaws, but I'm finding Emma and the Vampires fits my expectations. It's frequently funny and much of the original story is left intact; it's simply altered to fit a silly vampire theme. Fun. It will be interesting to see how the story plays out. I'm not far (about 60 pages in), but I am truly enjoying Emma and the Vampires.

The A & E version of Emma is my first completed item for the Everything Austen II challenge.

A Curable Romantic by Joseph Skibell - an unexpected surprise from Algonquin Books. At 593 pages, I'm vaguely intimidated. And, yet, having read the promotional material, I'm also intrigued. It sounds like a good, meaty story.

Must dash. Happy Wednesday!
©2010 Nancy Horner. All rights reserved. If you are not reading this post at Bookfoolery and Babble, you are reading a stolen feed. Email bookfoolery@gmail.com for written permission to reproduce text or photos.
Posted by Bookfool at 11:30 AM