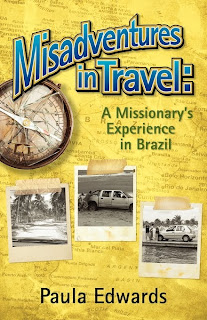 Misadventures in Travel is about a couple who chose to travel to Brazil to do a job that primarily involved driving around the coastal areas to look for fishing villages that other missionaries might find good locations for evangelism (teaching the people about God, in this case the Baptist doctrine) with occasional stops to chat with people about Christianity. I've found it a fairly slow read, but part of that had to do with the fact that there's no map in the book and the Edwards' did a great deal of traveling but almost none of the city names were familiar.

Eventually, I decided to look up Brazil (which is huge) on GoogleEarth. I printed out the relevant section for reference. If anyone wants me to review a World Atlas, just let me know. I really could have used one.

Scouting out fishing villages along Brazil's coast had to be a monstrous job, driving often on muddy or dramatically pot-holed roads and catching rides on ferries, some large and tidy, some that looked like they weren't necessarily up to the job.

What I liked about this book: There are some excellent anecdotes, especially about the kindness of strangers as Paula and her husband, Van, often had to deal with the difficulty of finding a place to sleep at night in a country where the choice was usually a pousada -- apparently, a small, family-run place that was not clearly advertised -- in the small towns or a hotel in more populous areas. Sometimes, they simply couldn't find a place to stay as night was falling and they had to decide whether or not to take a chance on finding another town. They experienced numerous car breakdowns, which often resulted in friendships with the people who helped them find tow trucks, dealerships, places to eat and sleep.

What I disliked about this book: It's shy on detailed information and there is no map of Brazil to clarify where the couple traveled, hence the GoogleEarth print-out. The back cover blurb explains their job better than the text inside but I still feel as if I don't quite get the purpose. I think the deal was that they were supposed to find places for Baptist missionaries to go evangelize, but they were particularly seeking fishing villages. I never understood why they were specifically targeting fishing villages, nor did I get why they got so excited every time they saw a Baptist church. My assumption was that they were simply looking to fill in the gaps and when they saw a church it meant, "Nothing needs to be done, here."

I was also frustrated by what I considered slightly lazy writing. For example, the author translated a city name, Porto de Galinhas, meaning Port of the Chickens and said there was a story behind the name . . . but she didn't remember it. In non-fiction, facts are important. I found it frustrating that she didn't take the time to research the story because translating the name without explaining its origin simply meant she'd told half a story and left the reader hanging. It took me about 5 seconds with a computer and Google to find the information left out:

Porto de Galinhas means Port of Chickens. During the 18th century, when the traffic of slaves was forbidden, "chicken" was the code used to refer to the slaves. "There are new chickens in town" was the way to say that a ship loaded with slaves had arrived.

Who I think would like this book: Christians, particularly of the Baptist faith, who are curious what it's like to do this particular job and/or adjust to life in a foreign country, and people who enjoy memoirs. But, be aware that there's a lot of everyday life and the anedotes are really few and far between . It could have been a much better book with some added depth of detail.

It's official: Kiddo has left me with an empty nest. Technically, I'll be a weekend nester because he's planning to come home on weekends, but it feels like an empty nest -- especially when Miss Fiona goes off to hide for her Serious Napping Time and the house becomes ridiculously quiet.

This next few weeks is going to be an adjustment time for me, so if I disappear for a few days or a week or two, don't worry. It just means I'm trying to figure out what to do with myself and that might involve stepping away from the computer for a while. I will still at least show up to post scheduled reviews.

Just (also) finished: The Extraordinary Secrets of April, May and June by Robin Benway, a slightly-paranormal YA. Will review that as soon as possible. There are some books that have been waiting for review for several weeks, but I'm not sure what order they'll end up getting reviewed. If there's a particular book I've recently read and for which you've been waiting for a review, just let me know. I'll try to push it forward a little bit.

Off to clean my nest!

Bookfool . . . pondering more kittens to add a little noise to the house

©2010 Nancy Horner. All rights reserved. If you are not reading this post at Bookfoolery and Babble, you are reading a stolen feed. Email bookfoolery@gmail.com for written permission to reproduce text or photos.
Posted by Bookfool at 12:00 PM