Home to Woefield by Susan Juby 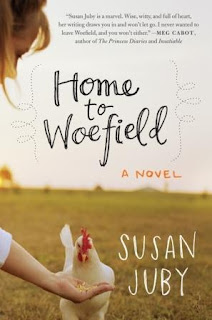 Home to Woefield by Susan Juby
Copyright 2011
Harper - General Fiction
306 pages
"Prudence asked you to talk to me?"
He frowned. "No. I saw you, drew my own conclusions. This has nothing to do with Prudence. I just thought I'd put it out there for you. Someone did the same for me."
This bastard was in a self-help program? For what? Square-jawed, cleft-chin sufferers? Handsome Bastards Anonymous?
--p. 239 of Home to Woefield - ARC; Some changes may have been made to final print version
Description:
Prudence is very much into saving the world in her own little way and does the best she can to grow her own organic food in her tiny apartment. When her boyfriend decides to leave and she inherits a farm on Vancouver Island from her uncle, Prudence is excited about the changes in her life. She can become a productive farmer!
But, even optimistic Prudence quickly realizes she has a lot more to deal with than she'd anticipated. Her uncle was in debt, the land is not fertile and she's vastly inexperienced. Still, nothing will stop Prudence. With her uncle's only worker at hand - a 70-year-old who entertained her uncle by playing his banjo and joining him for TV nights - she gets started. Then, a young alcoholic who has been hiding from the world, blogging about celebrities since high school, shows up and starts working for room and board. Finally, 11-year-old Sara Spratt's mother asks Prudence to let Sara house her chickens on Woefield property (because the neighbors are complaining).
Four wacky personalities, some surprisingly fascinating chickens and a half-sheared sheep are the main characters in Home to Woefield. The four are thrown together as a farming cooperative and while learning how to work together, they become a family.
My review:
I love the kind of book in which a bunch of oddballs are thrown together and eventually become a family unit, but I must say Susan Juby has created her little family with a skillful balance of hilarity and realism. Prudence is a delight. From the moment she shows up on her farm, you know her can-do attitude and effervescent personality are going to win the day. I absolutely loved everything about this book -- the characters, the storyline, the little touch of romance, the writing, everything.
The bottom line:
Highly recommended. Well-developed, likable characters, perfect plotting, fantastic pace and a wonderful, upbeat ending make the pages fly. I really hated to leave Woefield, when I got to the ending. Home to Woefield is a feel-good novel and, at this point, my top read of the year. And, I've read a lot of great books, this year!!
One warning: There's quite a bit of bad language (as shown in the quote above) but it's just a part of who those characters are and they wouldn't be the same without it. I say, "they," although I don't actually remember whether it was one character or two that swore a lot. I think a part of what the author was trying to say is that working hard, feeling productive and finding friends who are willing to accept you as you are can help restore a wounded soul.
Stylistically speaking: Each chapter in Home to Woefield is written from the point of view of one of the 4 characters and they're labeled as such. But Prudence, Seth, Earl and Sara all have such distinctive voices that it would be easy to identify the narrator of each chapter, even without the heading. We're talking pretty sharp writing.
Cover thoughts: I love the cover because it fits the setting and shows just a touch of a face that I like to think of as belonging to Prudence -- little enough to keep from overriding the reader's imagination, though.
My thanks to HarperCollins for the review copy of Home to Woefield.
And, many thanks to those who left a comment on my Going Unplugged post. I'm still not reading all that much, although I finished The Peach Keeper by Sarah Addison Allen (which I'll review for a tour, the first week of May) and am currently reading Kat, Incorrigible by Stephanie Burgis. I'm going to stay semi-unplugged for a while -- meaning, if I can get myself to go ahead and write a review I will, but I'm not going to be very good about visiting blogs. Between my new exercise regime and all the other things happening in my life, I think blogging is probably just going to be hit and miss till the end of summer.
Posts forthcoming:
I think I have 6 more book reviews to go, at this point. I also need to write about a few DNFs and summarize my March Reads in Review. Since I'm so pressed for time, I'm going to do my utter best to keep those posts brief. How many of you are laughing because you've heard this a dozen times, already? Yes, yes, I suck at brevity.
Good note upon which to close, I think. Happy Wednesday!
©2011 Nancy Horner. All rights reserved. If you are reading this post at a site other than Bookfoolery and Babble or its RSS feed, you are reading a stolen feed. Email bookfoolery@gmail.com for written permission to reproduce text or photos.
Posted by Bookfool at 1:40 PM