Pictures of You by Caroline Leavitt 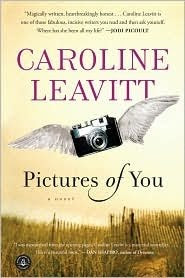 Pictures of You by Caroline Leavitt
Copyright 2010
Algonquin - General Fiction
335 pages, incl. author notes and discussion questions
When he got to the turnoff road, he was sweating, and when he made the turn, he felt as if someone had stapled his heart.
--p. 170
He used to work with a sheetrock guy whose wife and child had died in a plane crash. The man never got over it, and it used to irritate Charlie the way Hank would say, "I dreamed about Jean and Suzie last night," and everyone would look sort of stricken, wondering, Why doesn't he get over it already? But that was the secret, wasn't it? You never got over what you lost. You always carried it with you, stitched to you like Peter Pan's shadow. And you never wanted to get over it, because who wanted to forget a time that had been so important? No, the truth was, you wanted to remember it always.
--p. 243
Book description:
Isabelle and April are both running away from their husbands when they hit a fog bank and their cars collide. One woman survives; the other dies instantly. Although the accident occurs miles from their homes, both are running away from marriages and life in the same town. The surviving woman is bound to cross paths with the husband and child of the woman who died. I'm going to copy last sentence of the book cover blurb because I like it. "As these three lives intersect, the book asks, how well do we really know those we love and how do we open our hearts to forgive the unforgivable?"
My review:
I shouldn't have looked at the back cover of the book because I like to write reviews in my own words, but I love the adjectives Chris Bohjalian used to describe Pictures of You: riveting, poignant, deeply moving, beautiful, hypnotic. I'm not even certain why Pictures of You pulled me in so fiercely, but I'm guessing it has to do with the fact that I was able to easily empathize with the characters, having been through unexpected loss. The second quote, above, particularly touched me. And, I loved the author's writing style. I found her characters were believably human and emotional. There were a few times I felt pulled out of the writing for a minute, but then she sucked me right back in.
Pictures of You has an open-ended conclusion, which the author talks about a bit in the additional material (I have the paperback edition and can't say if the extra material is available in the hardback copy). The author, Caroline Leavitt, mentions that she doesn't like perfectly wrapped-up endings, so her own endings are deliberately left open to the reader's imagination. Some people will probably be upset about that, but I don't mind that kind of an ending at times; it really just depends upon the book. In this case, I was okay with it. I didn't necessarily love what happened to the characters but it had the ring of truth and in the end, I really thought the book was deeply meaningful and what happened may not have fit my expectations but it was more realistic than the happily-ever-after ending I tend to favor.
The bottom line:
Pictures of You is a page-turner and very emotional, but there are plenty of upbeat moments mixed in. Lovely writing, an unbeatable dilemma, well-rounded characters and great dialogue make it a winner. If you like your endings wrapped up in a pretty bow, this may not be the book for you. I didn't love the way the book ended but I thought it made sense, given the storyline.
If I were to rate the book numerically (which I don't do, but I want to clarify how much I liked it), I would give it a 4.5/5. I'm going to write a review on Amazon -- something I don't usually do -- to help offset some of the lower ratings that I don't think it deserved. I do think it's probably a love/hate type of book because of the ending and the fact that not everyone can necessarily relate to the kind of grief the characters experience, but I'm in the "love" category. In fact, I stayed up late reading it because I couldn't put it down and after I finished I thought, "I'd really like to reread this," because there were a few things I thought I'd like to revisit after finding out some of the little plot twists that caught me off-guard toward the end.
Many thanks to Algonquin Books for my copy, which was sent unsolicited after I'd added it to my wish list. Ha! What luck!
Cover thoughts:
I like the cover. It's intriguing and eye-catching, in spite of fairly dull colors. One of the characters is a photographer and the wings are meant to represent an angel, although I think if I were to tell you why, it would be a spoiler. Point being, the cover fits the story.
Coming up:
Fiona Friday will be a pretty crappy picture, but it's cute and it's a photo of Isabel -- Fiona's been Little Miss Contrary, lately, skittering away when I get out the camera. I'll post that later on, tonight.
©2011 Nancy Horner. All rights reserved. If you are reading this post at a site other than Bookfoolery and Babble or its RSS feed, you are reading a stolen feed. Email bookfoolery@gmail.com for written permission to reproduce text or photos.
Posted by Bookfool at 12:26 PM