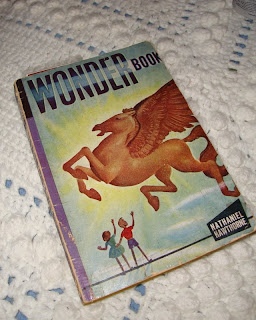 Wonder Book by Nathaniel Hawthorne
Orig. Published 1852 as
A Wonder Book for Girls and Boys -
Myths rewritten for children
My edition contains no copyright date
A Wonder Book for Girls and Boys, as Wonder Book was originally known (and still is -- I have no idea why the publisher of this particular edition altered the title) is a book of myths rewritten for children.
Before each myth, there's an introduction in which the children of Tanglewood -- a large estate in Massachusettes in which Hawthorne lived for a time -- gather around their teenage cousin Eustace Bright to hear him tell a story. Each time he tells a story, the children have moved to another location. In one, they're stuck indoors watching a blizzard, in another they're happily playing by the river while golden leaves fall around them.
And, then Eustace gathers the children, who are humorously given the names of flowers and tells them a tale. The first is "The Gorgon's Head," which led to an interesting conversation with Kiddo that I alluded to, a couple weeks ago.
While reading the story, I asked Kiddo if he was familiar with the tale of the Gorgon's head. Kiddo, you must know, is a mythology enthusiast. He has read and reread every book we have on mythology and studied them so thoroughly that when he took a mythology class in high school, the teacher told him he might as well teach the class because he seemed to know more than she did.
In response to my question, Kiddo said, "You mean the Medusa Gorgon? Because there are three Gorgons."
"Yes, yes," I said. "I just wondered because I'm reading about the fellow who has to bring back the Gorgon's head to the king to get his mother freed and he just pulled the head out of the bag and turned everyone to stone."
Kiddo looked exasperated. "That's Perseus."
"Right, Perseus. You know I'm not very big on mythology."
"Mom, everyone's heard of the Medusa Gorgon."
Back to the book: I enjoyed it as much for the 19th-century language as for the tales, themselves, many of which were actually familiar to me (but obviously not all). Hawthorne occasionally calls key characters by different names. Mercury, for example, is called Quicksilver. But, then the children correct Eustace -- who is the one allegedly embellishing the myths -- and a professor chides him a bit. All in all, a very fun little read.
I've just looked up A Wonder Book for Girls and Boys at Wikipedia because I had to question whether or not my edition was complete, since the title was changed a bit; and it is, in fact, complete. There are only 6 stories. I have my favorites, of course, but in general I thought it was fun reading and a great change of pace. Kiddo has informed me that I am required to keep our copy because he thinks "old" equals "valuable". I've tried to explain to him that it's obviously a book printed on acid paper because the pages tear at the even the merest hint of a touch, but he's insistent so I guess I'll toss it into the file cabinet and hope he forgets it.
Obviously, I've decided to keep this review informal and chatty. I have to rush to the library to return books, so I'll try to squeeze in one more review, later, if I can. If not, there's always tomorrow, but I do want to get caught up a little, as soon as possible. This is my second review for today; both The Goose Girl and Wonder Book are books I purchased.
Happy Monday!
©2011 Nancy Horner. All rights reserved. If you are reading this post at a site other than Bookfoolery and Babble or its RSS feed, you are reading a stolen feed. Email bookfoolery@gmail.com for written permission to reproduce text or photos.
Posted by Bookfool at 2:04 PM