Proof of Guilt by Charles Todd 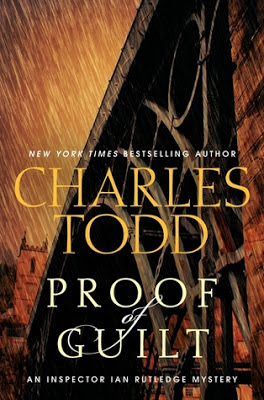 It's probably a very bad idea to start reading a mystery series so late in the game.  Proof of Guilt is apparently #14 in the Ian Rutledge series.  I used to read out of order all the time, back when I was a regular mystery reader, though; and, I wanted to give mother-son writing team Charles Todd a second chance after the disappointment of The Walnut Tree (which I still believe was simply rushed to press without a decent attempt at editing).

Proof of Guilt is a bit twisty without every becoming an utterly confusing story.  It is 1920.  A body has been discovered but the man appears not to have died at the location where he was discovered. Tucked inside the coat is a very distinctive and obviously expensive watch.  There's no identification on the body and when Inspector Rutledge takes the watch to a jeweler, he finds that it is, indeed, an expensive family heirloom.  However, the body in question is not that of the watch owner and the man who does own the watch is missing.

There are a lot of things going on in Proof of Guilt.  There is a new man in charge and Rutledge doesn't have a great deal of respect for him.  There is a body, a missing man, a broken engagement, a connection to Spain and another body that doesn't appear to have any relation to the story in question until late in the book.  Inspector Rutledge may be a continuing character but near as I can tell, not many years can have passed during the scope of this series.  He served in WWI and suffers from PTSD, the ghost of a man he was forced to shoot for insubordination still haunting him, the claustrophobia and the occasional shaking/sweating episode ever-present.  Having perused reviews of a few earlier books (I chose to avoid reading any reviews of Proof of Guilt so that my feelings about it would remain untouched), I can see that not much has changed.

And, therein the problem lies.  There was just something missing from this book.  Well, several somethings, actually.  First, there are loads of characters without apparent distinguishing characteristics. Hamish, the man who haunts Rutledge, is well-described (at least, inasmuch as the reason the inspector is haunted) but the vast majority of the men Rutledge works with are not.  So, they all tend to blur together.  It's hard to determine who they all are and their working relationships with Rutledge. But, in fact, Rutledge also doesn't seem to want to have much to do with anyone but his sister -- and she only shows up briefly.  So, the book is strongly lacking in emotion and meaningful interaction.  It's all mystery and little heart, in other words.

As to the mystery itself, I found it convoluted enough that it wasn't completely predictable.  There were scenes that I found transparent but the ending itself surprised me.  Would it have surprised me if I was a regular mystery reader?  I can't say.

Here's how I felt about the book, as the reading progressed:

Beginning:  Meh.  Having trouble getting into it.  Seemed like there was a lot of uncomfortable pummeling with questions but otherwise the dialogue was stilted and unrealistic. Nice light reading, though; apart from dialogue, the writing was smooth.
About 1/3 in:  Still no grip on any of the secondary characters but I was becoming accustomed to the rhythm of the story and not tempted to set the book aside.  Definitely better-edited than The Walnut Tree.
Halfway:  Too many characters and no idea where the hell the plot was going.  Also, were inspectors at Scotland Yard really that incompetent?  The thought processes of various people investigating seemed quite off to me.
80-90% in:  There were at least 5 characters whose last names began with the letter "B".  Keeping names easily distinguishable by using different letters is a basic of writing.  I was kind of stunned.  But, I was really enjoying the story, by this point, and just kept flipping back to try to keep the characters straight.
90% in:  Seriously?  Did they arrest people and threaten to hang them without even discovering the body of a missing person?  Still curious what would happen, though.
Ending:  Totally pissed off.  There was an answer to the mystery but no wrap-up.  The book simply ended . . . and, in fact, there was even a line to tease the reader into buying the next book.  At 80-95% in, I was beginning to rethink my aversion to mysteries and considering reading more by Charles Todd.  The ending blew that concept out of the water.  I cannot bear being teased by an author.  That is it for me.  No more Charles Todd books.

Having said all that, I did enjoy this book.  It took some time and I never felt emotionally invested in the story, but had the book been properly wrapped up I would have loved it.  It went from being a 4.5-star book at about 90% (in spite of many problems) to a 3-star because of the way it ended.  That's a pretty huge deduction for a crummy ending, but that's how I felt when I closed the book.

Recommended only to regular mystery readers who enjoy this author's writing.  A decent mystery but the lackluster characterization and a terrible ending ruined this book for me.

My thanks to TLC Tours for the advance reader's edition of Proof of Guilt.  I am glad I gave this author a second chance, regardless of how I felt upon closing the book.

©2013 Nancy Horner. All rights reserved. If you are reading this post at a site other than Bookfoolery and Babble or its RSS feed, you are reading a stolen feed. Email bookfoolery@gmail.com for written permission to reproduce text or photos.
Posted by Bookfool at 6:00 AM