The Promise of Stardust by Priscille Sibley 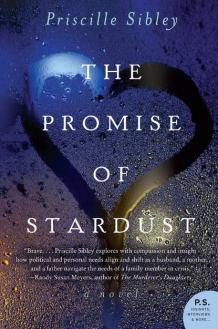 Oh, boy.  This one is going to be rough.  I think I'll let a coffee mug interview me.  Sound good?  I haven't been interviewed in a while.

WARNING:  I've tried to keep this interview as spoiler-free as possible, but if you want this book to be totally surprising or plan to read The Promise of Stardust right away, I'd advise you to skip down to the bottom line.  Sometimes I screw up and give things away, in spite of good intentions.  This part's probably not a spoiler:

Coffee Mug:  What is The Promise of Stardust about?

Bookfool:  The Promise of Stardust is about a moral dilemma -- to remove from life support or not?  When neurologist Matt Beaulieu is called to the emergency room after his wife Elle has fallen and hit her head, he knows immediately that she is never coming back; she is brain dead.  Elle's mother was obviously in terrible pain, even when comatose, as she lay slowly dying, and Elle has always made it clear to friends and family that she absolutely does not want to be kept alive in a comatose state.

BUT . . . Here's where it starts to get potentially spoilery.  Skip this bit if you're nervous that I'll say something I shouldn't!  I'll let you know when it's safe to come out from under the table.

CM:  Why does Matt choose to leave Elle on life support?  What's the dilemma?

BF:  Elle is pregnant; without pregnancy, there would be no question about how to proceed. Matt understands his wife's instructions but knowing, as a neurologist, that she is brain dead and can feel no pain, he feels that she would want to be kept alive to give her unborn child a chance.  She's had numerous miscarriages and one stillbirth.  The chances that her body will continue to function till delivery are stacked against the baby's survival.  And, yet, Elle desperately wanted a baby, so Matt believes it's important to attempt to keep her alive long enough to deliver.

BF:  Just about everyone disagrees with Matt.  His mother, her brother, Matt's family, Elle's former boyfriend . . . everyone but Elle's father.  And, Matt's mother takes legal action to have her removed from life support.  Matt's mother is in possession of Elle's advanced medical directive.  But, is it still valid?  Does Matt have any say in what happens to his unborn child?

CM:  What makes this book resonate with you, as a reader?

BF:  My father died of the latent effects of a head injury and was removed from life support.  I can relate to this kind of tragedy.

CM:  Whose side were you on?

BF:  I thought Elle would want to be kept alive, but only because of her unborn child and her lack of pain.  It does enter into the bounds of the whole "personhood" controversy, about which I have mixed feelings.

CM:  Are you going to tell us how the court case and/or dilemma was resolved?

BF:  Of course not!  You really have to read the book, yourself.  Even if you're a coffee mug, I suggest bringing tissues along to the reading of this book.

END WARNING!  It's safe to emerge from your closet, or whatever.  The rest is just my opinion.

BF:  Highly recommended.  I loved The Promise of Stardust.  It is a thought-provoking book worth talking about.  The dilemma is obviously a controversial one in many ways, but . . . I wanted to talk to someone about it.  I think it would make a terrific book club read.

CM:  What book do you recommend reading in tandem with The Promise of Stardust if you're in the mood to generate a really noisy discussion?

BF:  When She Woke by Hillary Jordan would be a great book to discuss with The Promise of Stardust -- that is, if your reading group can handle controversy.  My group is very enthusiastic and sometimes they'll just holler right over each other.  I don't know what would happen with the abortion/life support topic, but I think it would be interesting to pair the two books for discussion.

BF:  Another time, but thanks for the offer.  I think a photo of someone mugging for the camera sounds ideal: 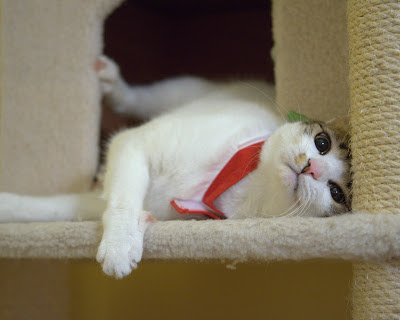 ©2013 Nancy Horner. All rights reserved. If you are reading this post at a site other than Bookfoolery and Babble or its RSS feed, you are reading a stolen feed. Email bookfoolery@gmail.com for written permission to reproduce text or photos.
Posted by Bookfool at 11:57 AM